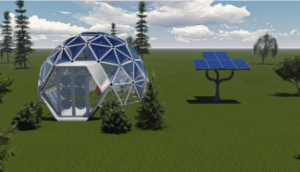 The young professional believes that practical demonstration of the eco-friendly renewable energy generating devices could be very suitable addition to the exhibitions of the Science Island National Science and Innovations Centre, which will be built in Kaunas centre, Nemunas island in the near future.

According to Balamoorthy, in order to fully use the potential of construction of A+ energy efficiency class buildings, one has to pay more and more attention to renewable energy. At the moment, Kaunas is not very active in this field.

For example, the 3 meters’ width and 100 meters’ length photovoltaic footpath could generate around 11.2 MWh of energy in a year. 10 tree-like windmills would add 24 MWh, 10 tree-like solar plants would add 7.4 MWh, and a photovoltaic sphere – 34 MWh to that number. In total, these small systems would generate 83.6 MWh of energy per year, which is enough to light 1.6 thousand LEDs for a whole year.

According to Balamoorthy, the innovative architectural elements and their construction could cost around 1.2 million euros. In his master thesis he has also included piezoelectric energy generation method – mushroom-like rain shelters or special roof sections – which would generate electricity from rain. However, these elements were not included into calculations.

“The proposed technologies are basically imitating forms found in nature. The tree-like windmills and solar plants would preserve the natural look of the island, and the footpath would blend into the landscape and sustain the spirit of biomimicry”, says the young KTU graduate.

Balamoorthy, who comes from India says that after working in a college in his home country for 3 years, he decided to expand his knowledge and to study in a country he has never been to.

“I lived Southampton, Great Britain, so I am already used to the European mentality and the way of life. To be honest, there is no much difference between Lithuania and Britain, except the language. Kaunas is a friendly city for international students, most of the people speak English, and are always willing to help”, says Hariharasubbu Balamoorthy, who has already learned several basic phrases in Lithuanian, and says that in Lithuanian there are many similar words to his native language.

He is planning to stay in Kaunas and to pursue doctoral studies here.