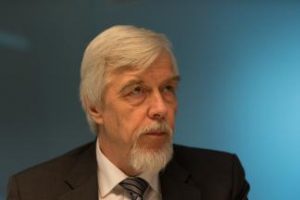 CERN Director General: This Is the Perfect Time for KTU Researchers to Join Us

He was impressed by the exceptional competences of Kaunas University of Technology’s (KTU) researchers. After visiting KTU last week Heuer said that he would be expecting to hear more of Lithuanian language in CERN facilities in the nearest future.

At KTU Heuer visited Santaka Valley’s laboratories and met the University’s management and researchers. Heuer, particle physicist and the Head of CERN is convinced that there are many possibilities for joint projects for the two institutions. Bellow is the interview with Professor Heuer taken during his visit to KTU.

Professor Heuer, judging by your first impression, how do you think the largest laboratory of particle physics could collaborate with KTU?

I know that KTU is very strong in the fields of materials science, electronics and information technologies. I have no doubts that we could find common interests in all of them, although I am interested in the latter two.

Earlier this year, a delegation from CERN visited KTU, and they were really impressed. Therefore, I am convinced that our collaboration will develop further.

There are around 20 researchers from Lithuania working at CERN now. What are your impressions on their competences? Do you expect more Lithuanians in the near future?

The small team of highly qualified researchers working on the large experiment is always respected and noticed. I can see the competences of Lithuanian engineers and IT programmers. These people are those who we are interested in.

Who do we need? The team of researchers is not much different from a good football team. It has to maintain balance between so-called dreamers and traditional well-organised scientists. You can never make a good football team only with dreamers or only with players, who follow the rules by the book. Same applies to research.

The launch of Large Hadron Collider (LHC) is one of the most important science events in this century. What is the next step for CERN?

The short term goal for the next 20 years is to explore and to use all the possibilities of the LHC. We have a detailed programme for this: in the first 10 years we are planning to use and to monitor the machine, and in the next 10 years we will work on improving it. In the future we expect to achieve 10 times more collides of the particles than today.

We are convinced that knowledge of KTU researchers will be of great value in this process: this is the perfect time to join us.

Also, there’s no need to fear LHC. More than once, I have heard warnings about us opening the black hole in the middle of the Earth and blowing up the planet. The Collider has been launched and we are still here. People should understand that although the processes taking place at LHC replicate the Big Bang, they are significantly smaller than the Big Bang itself, which happened milliards of years ago.

We are absolutely certain in what we are doing. However, fear was surrounding the construction of the Collider, fear followed its launch, so it is not surprising that people are still experiencing it.

It is very hard, even impossible to predict a new discovery. We believe that in the nearest future we can discover first particles of the dark matter. The discovery of Higgs boson has completed the image of our perceived world.

However, this world only comprises 5 percents of the universe. The rest of it is made of dark matter and dark energy which makes the universe expand. We do not know, what is the dark matter or the dark energy, and we are hoping to find answers to these questions with the help of LHC.