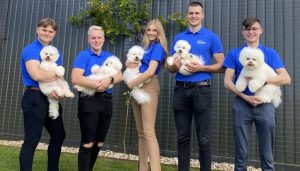 A team of KTU School of Economics and Business students became the Europe Regional Winners of the Global Online Marketing Academic Challenge GOMAC 2021. For the competition, the students presented a digital marketing campaign for KIKA the most popular retail chain of pet goods in Lithuania.

“From the very first days of cooperation we believed that the KTU team were worthy of a prize. Throughout the process of campaign development, it was evident that the students were determined, had a clear goal and were actively pursuing it. Their innovative ideas, knowledge and drive in the field have brought them success, for which we are very happy and proud to have been able to contribute”, says KIKA representative Karolina Tuminauskaitė.

According to the board of experts, who were selecting KTU team as Regional Winners in Europe, their pre-campaign report was strong and helped the judges have a good understanding of the direction the team intended to take. It also included a useful analysis of clients and competitors, an excellent outline of tangible goals and how their client’s objectives were linked to the team’s digital marketing strategy. The post-campaign report presented a compelling story using data and analytics. The recommendations were well thought out, specific, and relevant to their client’s situation. The campaign was based on a multi-platform approach, which included the use of social media.

“For the campaign, KIKA representatives set very ambitious goals, which we had to achieve with a relatively small budget. However, we didn’t want to disappoint the company and spent more than one day gathering information from various sources. We consulted with lecturers, representatives of advertising agencies and searched for relevant information on the Internet. When we found out that we had become the winners of the European region, we were extremely happy”, says Valentinas Mosteikis, one of the members of the winning team.

The supervising lecturers teaching in Virtual Marketing and Social Media Marketing study modules, encourage their students’ participation in digital marketing competitions every year. This year, from the seven participating teams, five became winners, finalists or semifinalists of the GOMAC 2021.

“Our team of lecturers is supplemented by data scientist-practitioner KTU alumni Dr Marius Vileiniškis, the representative of the smart advertising agency Idea Prima Linas Damanskis and digital marketing strategist Elvinas Jakimovas. This allows our students to have a comprehensive experience of working in a modern agency. It is great that the students were not only interested in the innovations, but also quickly applied them in their developing campaigns”, says Vaičiukynaitė, a researcher and lecturer at the KTU SEB Digitization Research Group and KEEN.

According to Vaičiukynaitė, the classes on social media marketing focus not only on the latest interdisciplinary knowledge, data analytics, but also on innovative digital solutions for analytical, behavioral and eye tracking artificial intelligence.