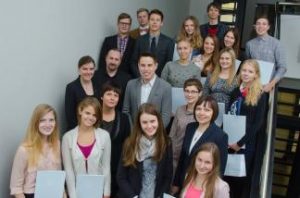 Two teams of KTU School of Economics and Business students were announced as winners in an annual Google Online Marketing Challenge this year. KTU students became Google+ Social Media Marketing Global Winners and European Winners. One more KTU students’ team made it to the Google+ Social Media Marketing Final in Europe region. This was the first time ever when students from a Lithuanian university won the Challenge.

This week the winners were awarded Acknowledgment Letters signed by the University Rector. Google Marketing Manager for Baltics Regimantas Urbanas and Partners Coordinator Karina Vilkauskaitė were also present at the celebratory session.

‘KTU team has been participating in the Challenge for six years – even before the local Google team was formed in Lithuania. This year’s accomplishment is a great achievement for the University, demonstrating that KTU is not a newcomer in the world of advanced technologies’, said Urbanas.

Vilkauskaitė considers the winning a great international achievement: ‘I wish you repeating victory every year. I remember discussing the possibility of a team from a small country like Lithuania winning the Challenge. Today we are faced with a fact’.

Edita Gimžauskienė, the dean of KTU School of Economic and Business is convinced that KTU students owe their winning to the years of practice and hard work, and not to luck.

‘It was first time we participated in Google+ Social Media Marketing competition of Google Marketing Challenge, besides the mandatory Google AdWords campaign. To be honest, we did not anticipate such high achievements. Therefore news about winning in the competition were unexpected and exciting’, said Vitkauskaitė.

According to Rimantas Gatautis, winning in the competition would not be possible without training the students received through courses such as Marketing in Virtual Environments and Social Media Marketing delivered at KTU. These courses complete with interactive seminars and guest lectures given by practitioners render students skills needed for Google AdWords certification exams.

During Google AdWords Business competition the teams of 3–6 students collaborating with a business company have to accomplish three weeks campaign worth 250 US dollars.

Google+ Social Media Marketing competition was added to the Challenge in 2012. Students taking part in it have to carry out an additional social marketing campaign for the company on Google+ social network.

KTU students have been participating in the Challenge for 6 years. Although they have always participated in the compulsory Google AdWords competition, this year they entered Google+ Social Media Marketing competition for the first time. This decision has proved lucky.