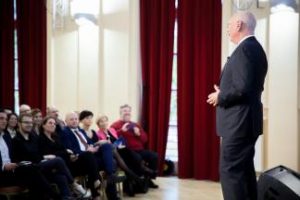 Honorary Doctor of KTU Klaus Schwab: Industry 4.0 Must be Followed by Education 4.0

KTU Chairman of the Senate Rytis Krušinskas introducing Professor Schwab to the University community stated that this exceptional event was one step forward to the revolution in Lithuanian educational system.

“It is a great pleasure to stand here and to be bestowed a title of honorary doctor of KTU. Although it is not the first honorary degree in my life, but the one I will especially treasure”, said Professor Schwab during his acceptance speech in the Ceremony.

The renowned thinker and scientist regards Lithuania as a country of great potential, which is putting a lot of emphasis on education.

Ambassador for the University and Lithuania

Professor Schwab, who has extensively studied the concept of the fourth industrial revolution said: “Usually the fourth industrial revolution is characterised as the fight between robots and humans. We will win this fight if we remember our roots and these aspects which make us human. One of those aspects is creativity, which I saw in the University today”.

Professor Schwab said he was especially pleased to have been able to contribute into integrating Lithuania in the global activities through the efforts of the World Economic Forum since 1990.

“This day I will never forget, and I will go home reinforced. To be awarded the title of Honorary Doctor of KTU is both great honour and great responsibility. I hope that I will become good ambassador for Lithuania and KTU”, said the 45th honorary doctor of the University.

KTU Chairman of the Senate Professor Krušinskas emphasised the importance of this day to KTU.

“We live in a very dynamic environment; the fourth industrial revolution is affecting our lives. However, the revolution in the educational system is also taking place. I hope that by implementing changes we will win the fight for the better future of Lithuania”, said Krušinskas.

Revolution in education is inevitable

According to Robertas Dargis, the President of Lithuanian Confederation of Industrialists and the member of KTU Council, the awarding of the University Honorary Doctor’s title to Professor Schwab is an exceptional event in Lithuania.

“One of the world leaders, Professor Klaus Schwab was participating in Year Economics Forum’17 yesterday, and today he was awarded the honorary doctor’s regalia at KTU. The main message he brings is: the world is changing, we are stepping into the age of the fourth industrial revolution, which is impressive by its fastness, extent and complexity”, said Dargis.

Technologies will change all the areas of our lives, therefore society needs to prepare for them very responsibly.

“Professor Schwab emphasizes that changes are impossible without taking into account the three components: business, science and society. All of us working in these fields have to combine our efforts to get through the changes and to make our country stronger”, said Robertas Dargis.

The President of the Lithuanian Confederation of Industrialists is convinced that education is at the fundament of the country: “As the fourth industrial revolution is inevitable, so is the revolution in education sector”.

He wished for KTU to become the strongest university in Lithuania with the most innovative ideas, the strongest academic resources and open academic community, which, in turn, would change the society and the academic city Kaunas and all Lithuania.

The honorary doctorate for Professor Klaus Schwab was awarded for spreading the knowledge on economy and innovative ideas, for fostering social entrepreneurship and support for young businesses, and for his contribution into developing the concept of the 4th industrial revolution.

Born in 1938 in Ravensburg, Germany, Professor was the first to develop the ideas of private-public partnership, social entrepreneurship, complex stakeholders’ attitude and other concepts.

Professor Klaus Schwab has been actively cooperating with Lithuania in 1990 when our country was invited to participate in the World Economic Forum. In 2009 Professor was awarded Order for Merits to Lithuania Commander’s Cross by the President of Lithuania Valdas Adamkus.

After the Honorary Doctor’s Regalia Award Ceremony, Professor Schwab read an open lecture “Leadership Challenges in the Age of the Fourth Industrial Revolution” for KTU students and the academic community. The lecture was broadcasted live on DELFI.TV.

12 October Professor Schwab has delivered a speech in Year Economic Forum’17 in Vilnius, Lithuania. During the event his most recent book, international bestseller The Fourth Industrial Revolution, exploring the ideas of the fourth industrial revolution was introduced. 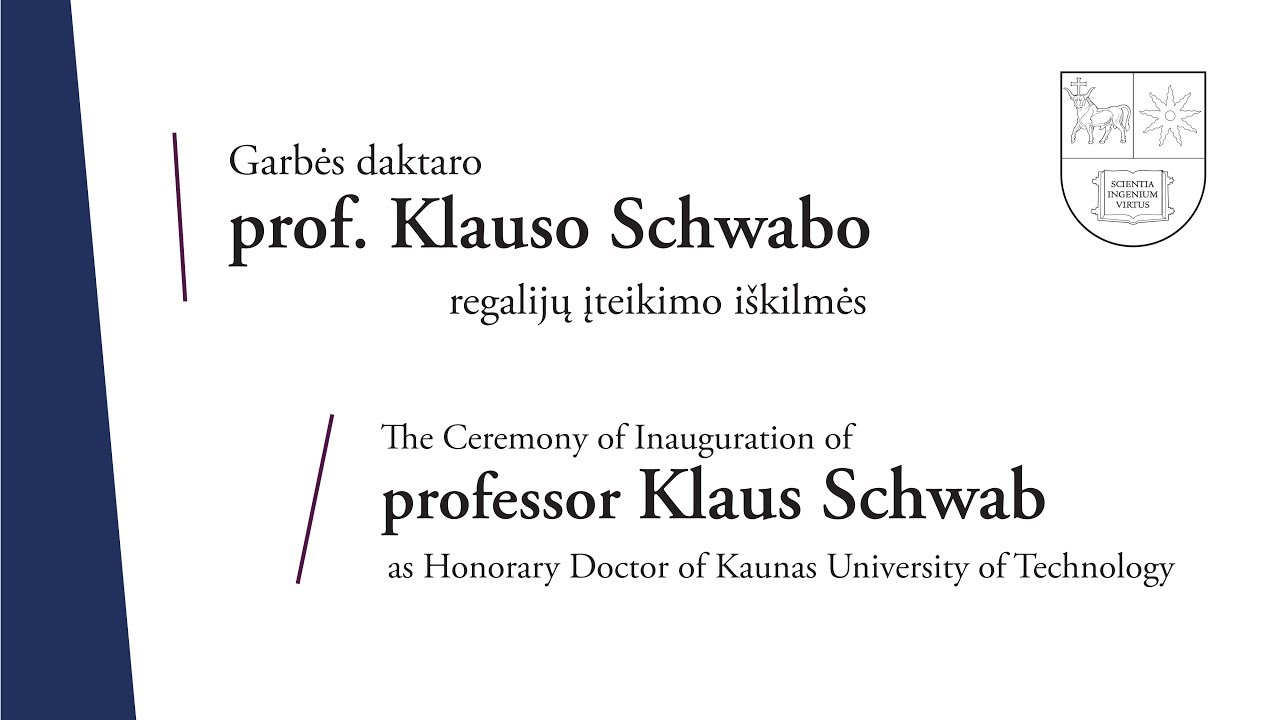