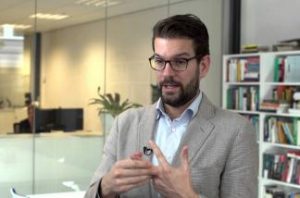 ​“National governance should be more open and more honest about what they can and cannot deliver, they should give more realistic expectations to the citizens”, says Caspar van den Berg of Leiden University (the Netherlands). The US policies and multi-level governance expert is convinced that it is time now to realise that we are all bound to the EU legislation, to the international economic situation and other types of limitations.

At Kaunas University of Technology (KTU) Caspar van den Berg read lectures for students, encouraging them to take interest in the decisions taken at European level, the local level and so forth, because that have an impact on their daily life. According to him, the democratic duties of citizens are to pay more attention on their own responsibilities.

The idea is that not a single one of these levels can really act independently from the rest. So, they are all mutually dependent and they all need to work together in order to make policies work basically. There’s also the horizontal dimension which means that state sectors are no longer the only sectors involved in government or governance. Also we have private actors, business actors, citizens, associations, society and all these kinds of actors. And they all are taking part in making and implementing policies.

So basically when we talk about multi-level governance, we talk about this whole landscape of different actors, different levels of government who are working together in networks and who are co-dependent on one another.

In this lecture I was talking about what it means for the bureaucracy to be part of such a system.

What kind of challenges are coming up when those different levels are compelled to work together? 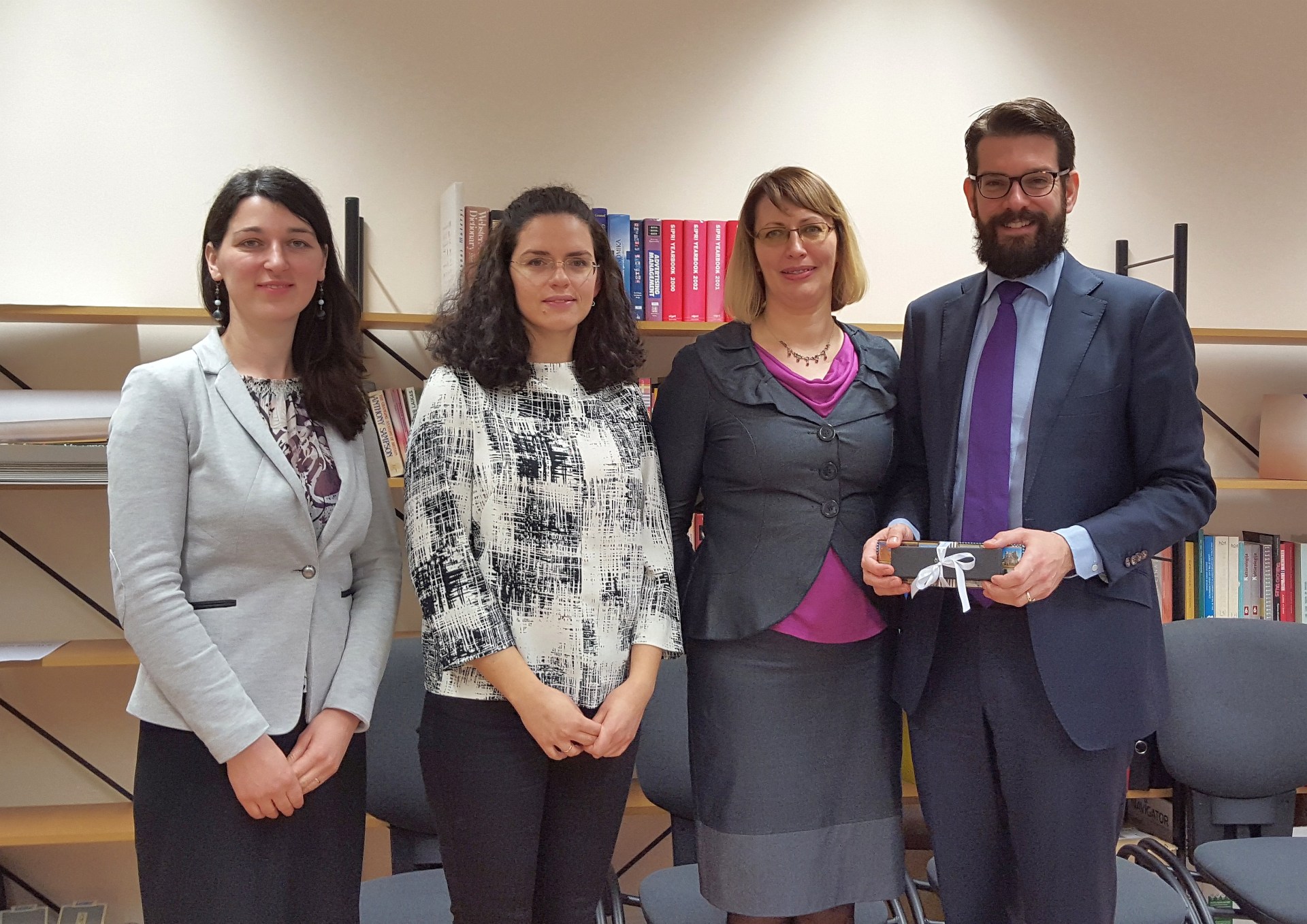 It has multiple challenges. If there are so many different actors involved then it means that for instance in a system in which it’s really just a central level of government, it’s much easier to have the connection between the representation of people – the parliament – and the executive – the government – and with the executive comes bureaucracy.

So the communication between the will of the people and the people who are implementing that agenda is much clearer than in a system where everybody is working together. It gets much more complicated, and therefore the alliance of accountability and legitimacy are much more difficult to see. This is part of the reason why people are also sometimes not very satisfied with the democratic input or the democratic accountability in the European Union.

What was the most important message you wanted to convey through your lecture?

I think, the main message was that often when you look to political or policy problems only in one country people tend to think that they are very exceptional, that only they are struggling with these kinds of problems. But when you do cross-national comparative research and look at multiple countries you actually see that most of the problems are visible in all of the countries.

So maybe one country has a different emphasis here or there but the underline problems are everywhere the same. That’s the problem that government nowadays are no longer able to intervene in societies with money or with laws the same way as they were able to do so 20-30-40 years ago. And in order to be effective they need to find new solutions working together with companies, citizens groups, other types of organizations in order to have an impact.

So that is something across the border in all of Europe. Sometimes it’s surprising to see that problems in Netherlands are very comparable with the problems in Finland or Spain.

The main point that I really wanted to make was that it’s often believed that because of European integration different countries are moving towards one and the same political administrative model. My research points to the fact that the differences are not disappearing they’re becoming smaller but the specificities of the different countries nowadays have developed historically – their culture, political system. Those things are preventing them for being exactly the same.

Why is it important to involve students into this transformation? Is it possible that today’s students will work in totally different administration system?

I think that the qualities and the competencies of the qualifications of civil servants are really changing at the moment. Also the job of the civil servants is becoming more challenging but also more interesting, because they do not only need to be able to be good servants of the politician and to have expertise different types of skills in the sense that they need to be able to operate in a very complex and turbulent societal environment.

Also, I hope that students in the room who have an academic interest will be interested in knowing more about how to do scientific research to this field, what are the theoretical challenges for people, think about the importance of comparative researches basically. 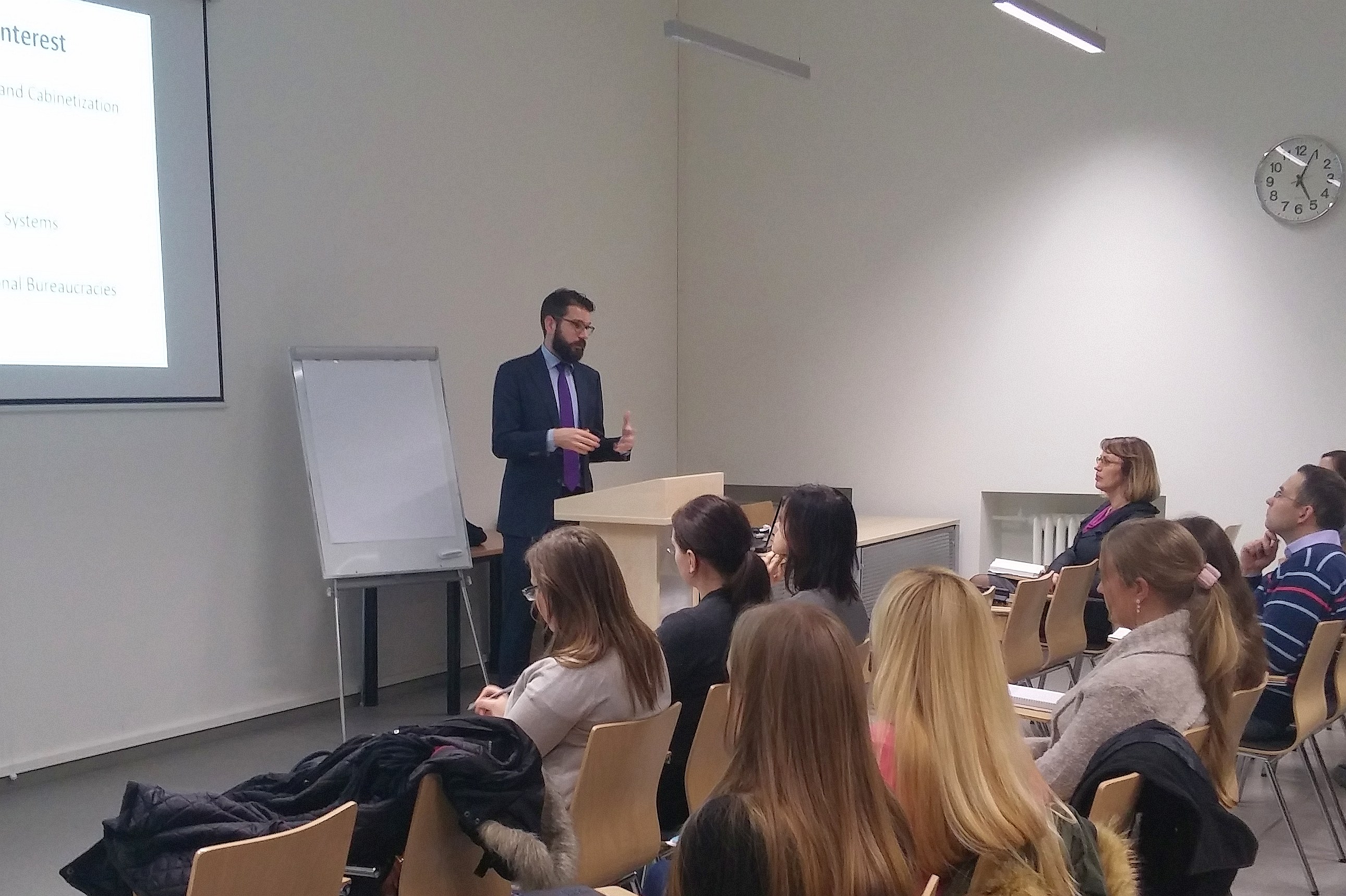 What is the biggest problem of public administration in the European Union?

At the moment national governments and media and population still believe that important decisions can be made at the national level and that the member states are sovereign in that they can almost operate in a vacuum.

In reality they are bound to European legislation, bound to the international economic situation, they are bound. So basically there is a lot of pressure on the national government in the sense that the people who vote for them expect them to maximize their freedom and to minimize the risks they are taking. In reality there are very little things that national government still can do.

Our model of democracy is good and it has it’s grounding in the right philosophy and so on, but it’s not really fit anymore. It looks like the national government as if it is all powerful but in the meantime that power has spread partly to the European level, partly to the lower levels. So we are looking for something, expecting a lot for something and they cannot deliver it anymore.

What solution would you suggest for solving this problem?

First of all, national governance should be more open and more honest about what they can and cannot deliver, they should give more realistic expectations to the citizens. But I also think that citizens should inform themselves better and also learn that a lot of the decisions that have an impact on their daily life’s are taken at European level, the local level and so forth. So, the democratic duties of citizens are to pay more attention on their own responsibilities.

Civil servants are often thought of as having no work ambitions or goals. Is it true that the biggest part of civil servants just want a stable salary, social guarantees and a warm place to work in?

I think that it is a stereotype, which is really popular all over the world. Of course, there are some aspects of working in the public sector that may attract the type of people you mentioned. But when I look at the ministries, I also see a lot of really ambitious people, who are ambitious because they want to make their country better. They want to help people who need specific services.

I see people who are ambitious in the personal level, who want to develop themselves and who want to move up to a higher place.

So, I really think that there are some truth in that statement but I also think that the large majority of people are very strongly motivated to make a difference in society.

Government should create new mechanism which should motivate the civil servants. For example: giving more opportunities for career development. If there is no chance of developing yourself, no chance to be better – you’re not going to attract any young people to work as civil servants.