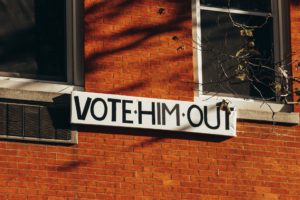 We often hear that some politicians call each other populists – it is not unusual to hear such accusations addressed at the former US President Donald Trump or the current Prime Minister of Hungary Viktor Orbán. In Lithuanian public space, the usage of the term “populist” is also quite common.

The scientists who research politics agree that the European Union and many other democratic countries have faced the challenge of populism over the past couple of decades – more and more people vote for populist parties, such as the Dutch Party for Freedom, the French National Front, or the Freedom Party of Austria. Their popularity is often based on well-known people, such as Geert Wilders, Marine Le Pen, or Jörg Haider.

Eglė Butkevičienė and Vaidas Morkevičius, researchers at KTU Faculty of Social Sciences, Humanities and Arts (FSSAH), say that populism, among other factors, heavily influences the overall quality of democracy. It is typical for populist ideology to see the world in black and white, to create contradictions, and divide the society into “us” and “them”.

DEMOS, a research project that is being carried out in many European countries, aims to understand what kind of democracy we have in Europe, to analyse the occurrences of populism, and to find ways to increase the democratic efficacy.

KTU researchers participating in the project say that the existing frustration with politics and politicians not only causes political apathy but also pushes people to support populist parties or groups that simplify complex problems and cause conflict in society.

Similarly to other politicians, those who spread populist ideas also actively use social media and directly communicate with their followers. Dr Butkevičienė says that one part of the DEMOS study conducted in Europe analysed appearances of populism in social media.

“This research was focused on populist party leaders’ posts on Facebook during the European Parliament election that took place in May of 2019, and on the entries that were published by the same people on Facebook outside of the election period”, says Dr Butkevičienė.

Based on the results of the research, the four most dominant forms of populist communication in social media were:

“In most countries, the communication on Facebook was directed against the national political elite”, says the researcher.

DEMOS study also revealed that during the election period, populists often directed their messages against newly arrived foreigners and refugees, and outside of the election period they paid more attention to the immigrants already living in the country.

Populism is not always related to radical right-wing views

Dr Butkevičienė points out that in Europe, especially in France, Austria, the Netherlands, and other countries, radical right-wing populism receives a lot of support from voters, which could be a consequence of frustration with the government. However, Dr Morkevičius notes that in Lithuania, the situation is significantly different – in our country, there are not many groups or political parties that fit the description of radical right-wing organisations. Lithuanian politicians lean towards demagoguery and poorly reasoned promises.

“Although classic populist rhetoric is not common in our country, dividing the society into “elite” and “dunces” or Ramūnas Karbauskis’ statements that a  Lithuanian Green Party of Peasants (Lit. LVŽS) candidate in the presidential election will represent the “bottom” rather than the “top” are very close to populism”, says Dr Morkevičius.

Populism is not an appropriate remedy from political apathy, because it encourages demagoguery, opposition, the rise of strong authoritarian leaders or even a tendency to agree with conspiracy theories.

According to the researcher, right-wing populists in Europe are united by their negative views on sexual minorities and their rights. In the “enemy” camp, in addition to sexual minorities, immigrants, people of other nationalities, supporters of other religions, elite, or the current government often appear.

However, left-wing populism also exists, and while it is mostly seen in Latin American countries, it has recently spread in Western Europe, with the Greek party Syriza and Spanish party Podemos being the best-known representatives.

According to scientists, assessing the current situation of COVID-19, there is little populist rhetoric in the management of the pandemic, both in Lithuania and other European countries.

“We can point out that in many cases, the opposition criticises the ruling authorities for quarantine management measures being too strict, although they already support these same measures when they come to power, so demagoguery and poorly supported accusations definitely exist”, says Dr Morkevičius.

Populism is natural, but not always wanted

Historically, populism dates back to ancient Roman times and is associated with politicians who sought the support of the lower strata of society, so this phenomenon in politics is not new. KTU researchers say that in the modern world, especially in Western Europe, populism is often associated with radical right-wing political powers, but this is not the case in all countries.

Although often viewed negatively, populist rhetoric, according to Dr Morkevičius, in a way is a natural part of democracy.

“In any country, politicians seek the support of the voters, therefore by addressing them with slogans focused on “ordinary people”, they try to gain that support”, says Morkevičius. According to him, in this case, populism is at least partially useful, because it reduces political apathy in society.

However, Dr Butkevičienė notes that even though populism can help gather people for joint activity, it is not a tool that should be used. In her opinion, populism is not an appropriate remedy from political apathy either, because it encourages demagoguery, opposition, the rise of strong authoritarian leaders or even a tendency to agree with conspiracy theories.