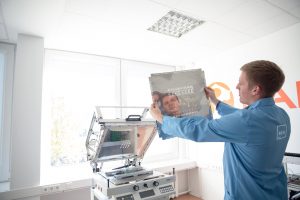 KTU – among the most business-friendly universities in Lithuania

“Business and academia relationships are becoming truly cooperative and collaborative. Neither side in the arrangement wants a transactional model, in which negotiations must take place every time a new research project is being considered. Instead, they are turning to a relationship model”, says Monika Vilkelytė, Investment Advisor at Invest Lithuania.

In the article, which was first published in Outsourcing&More magazine, Kaunas University of Technology (KTU) is mentioned as one of the good practice examples of a university’s cooperation with global businesses:

“In 2015, Intermedix invested more than 100,000 EUR into a specialist laboratory at the Kaunas Technology University (KTU) Faculty of Informatics, providing hardware and software for processing Big Data. (…) Since Intermedix established its first European service centre in Lithuania in 2014, many of its staff have been either current students or graduates of KTU”.

Another example is industrial control and automation company Festo, which has been providing scholarships and work placements to KTU students since 2014, and which representatives are delivering lectures on current issues in information technology for the University students. In 2017, KTU programming student Aivaras Čiurlionis received a scholarship from Festo for work on an applet for teaching mathematics that exploited the potential of neural networks.

According to the KTU Social Responsibility Report 2015–2017 published by United Nations Global Compact, in 2015–2017 the University signed 355 cooperation agreements with private companies, libraries, educational and state institutions from Lithuania and other countries. 205 joint venture agreements were signed, in connection to the University’s participation in local and international research projects, clusters and consortiums.