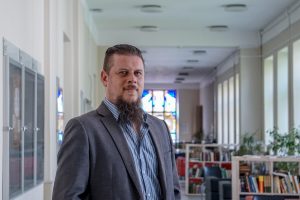 Gavin Stewart: good communication is the key to success

In the age of technologies and information, multitasking is becoming a common thing. We can do work on computer, take care of business on the phone and talk with a client in front of as all at the same time. However, some people take multitasking to the next level. It is one thing to simultaneously use a couple of devices at work and another to realize your potential in completely different occupations.

One of the people who is successful in a few professional areas is an Academic Writing teacher Gavin Stewart working in the Faculty of Social Sciences, Arts and Humanities of Kaunas University of Technology (KTU). He is not a regular linguist – Gavin is also a private chef and restaurant consultant and a Vice-President of Historical Medieval Battle International Association. Gavin Stewart told us how he manages to combine such different occupations, what is the key to success in them and how important is communication.

How did you end up being involved in such different activities? Could you tell a bit of the history – how did you become a chef and a linguist, and when did you join the medieval fight club?

It’s quite a long story. Actually gastronomy was first – when I was 15, I got a weekend job in a bakery. I’d love to write some poetic verse about how this was the start of my culinary journey, but in truth, it was more like the owners berating me and breaking my spirits until I could cook at a high level without making a sound. Throughout university I worked in restaurants, pubs and catering companies, but I had other ideas for my professional life, which was to include languages and communication, and I started my career as an English teacher in Milan, Italy. The medieval fighting thing happened almost by accident, and I never thought it would become anything like what it is today.

Could you name some benefits of having very different occupations?

Variety. You can never get bored of one thing when the other things are so totally different – when I come back to one, I see things I hadn’t noticed before, and renew my motivation for each.

Do these activities have something in common – what connects all of the things that you do?

Communication links all of these, hands down. This may be obvious in linguistics, but less so in the other areas. As Vice-President HMBIA, it is crucial to be available for fighters of all different countries, and varying levels of English. They should only have to worry about training and fighting, not their levels of English, so it’s important that my communication is clear and concise, and often diplomatic, depending on the situation. A good chef must be a good communicator – it’s not just about shouting all kinds of colourful words at cooks, but giving cooking demonstrations and teaching young chefs requires clear, relevant communication. How else can they learn if a chef waffles on about fried air the whole time?

Is it possible to apply some knowledge from one activity to another in your case?

Not so much, actually. Solid presentation skills are relevant to all three areas, and my management experience (gained from working as the Vice-Director of Studies in Milan) certainly helps my HMBIA work, but I haven’t come across an opportunity to conduct a lecture in full armour or make puff pastry while categorising syntax.

According to ‘A New Skills Agenda for Europe, 2016‘, the most important skills and competences in the 21st century are problem solving, critical thinking, being able to work in a team, cooperation, etc. Do you agree with them based on your personal experience?

Lecturing and teaching is quite an autonomous job and doesn’t immediately require those skills (although it doesn’t exclude them, and it depends on the position), but problem solving and teamwork are hugely important for my other disciplines. As the element which connects all three of these areas, communication is hugely important for success in these activities.

Technologies are changing the way we communicate – how does that affect the languages and how we use them online and in real life?

Wow, that’s an enormous question. We have become less personal with our communication, which in some cases leads to weak cross-cultural relationships, cyber-bullying and indifference towards human reactions. Just look at email communication these days – the already impersonal “best regards” has, for many people, become the passive-aggressive, insincere “br”. That said, business communication has, to some extent, benefitted from rapid and concise dialogue.

European Commission stresses the importance of teaching foreign languages in higher education as separate subjects to guarantee good language skills. Do you agree that it is not enough to study various subjects in English to become a fluent speaker?

Well, a fluent speaker doesn’t necessarily make a good communicator. I will never forget a series of presentations I attended in Rome, where a Brazilian speaker gave a fantastic presentation, which was well-received by the audience. He was followed by a confident American whose slick approach to presenting got the better of him; he failed to realise that his audience was largely made up of non-native speakers, who consequently did not understand most of his presentation. Furthermore, and more closely in relation to your question, subject variation has a range of relevance, and therefore benefit. Academia is not the only way towards becoming a fluent speaker – there is a whole world out there of fluency you can’t learn in a classroom.

English is somewhat a lingua franca nowadays. Why is it important to prepare professional translators?

Just because people have a high level of a language, doesn’t make them a translator – this is a huge misconception which has led to embarrassing consequences. People are a lot more clued up on modern languages and can spot a bad translation a mile off, and companies have come under fire with accusations of using Google Translate. Translators have to live their target languages, not just know them.