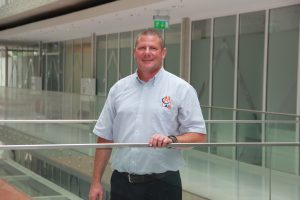 Huge objects that look small for radars, invisibility “cloaks” that can hide anything, 3D-printed optics, 3D-printed circuit boards and radios… If these descriptions sound as if taken from a science fiction book about the future, Dr Raymond C. Rumpf would say – this future is just around the corner.

“The greatest change that I saw in my life that transformed humanity entirely was the internet. I remember, when I was growing up and felt curious about something, the only way to find out was to go to a library. Now, young people can find answers to anything they are curious about in just 30 seconds. I wonder: does that make them happy? Lazy? More curious? Probably, all of the above,” says Dr Rumpf, the founder and the leader of EMLab at the University of Texas at El Paso, USA.

The author of several inventions in digital manufacturing, photonics and electromagnetics, author, entrepreneur, and academic, Dr Rumpf was sharing his insights with Kaunas University of Technology (KTU) students and researchers during his very first visit to the Baltic region, which was funded by Baltic-American Freedom Foundation.

“The closest I have been so far was Germany – and it’s not even that close! Lithuania has a great story to tell about the soviet occupation, which we need to hear. This is not something I wasn’t aware of, but while being here I got a deeper understanding, I felt what it meant to the people. This made me look at things differently,” says Dr Rumpf.

Invited by the KTU’s Materials Science Institute, he was impressed both by the equipment and the research done here: “It’s not different from touring in a US lab – people working here have the equipment and capabilities to solve some of the most important issues of today.”

Materials and surfaces that have magical properties

Who of us hasn’t dreamed of having an invisibility cloak to be able to secretly sneak out of embarrassing situations? Or possessing an army equipped with fighting vehicles hidden in plain sight? While this might sound unrealistic, scientists all over the world are designing materials and surfaces having this meta-property.

“Simply put, meta prefix means that something is better. So, metamaterial or metasurface is a material or surface that has a new functional property and is in some way better than the materials they are made of. In essence, it’s an engineering composite that looks like a fish net and when the waves of light go through it, it adds, let’s say, “magical” properties to the object. You can have something made of plastic or metal, that doesn’t behave like plastic or metal but like something else, entirely,” explains Dr Rumpf.

He goes on to explain the mechanics of making an object invisible: for example, we see a cup standing on the table because the light bounces off it and enters our eyes. If we were to change this, we would need to speed up the waves of light meeting the object – they need to be as fast as if there was nothing in their path. In other words, to make the wave break the speed of light.

“That’s where these metamaterials come into play because you have to design things that are impossible for the wave to do. Nonetheless, people have done this, and it actually works,” smiles Dr Rumpf admitting that in his classes he often “plays” with invisibility cloaks as this is entertaining for the students.

With his team, Dr Rumpf is designing and researching metamaterials and metasurfaces that can manipulate the paths and behaviour of electromagnetic waves, for example, to “turn off” refraction (the effect that makes a spoon put into a glass of water appear bent).

How does one make the complicated net structure that can change a simple object into a magic one? Dr Rumpf and his team have an answer to this – you need to digitally manufacture, or 3D-print them.

“The final shape of a metamaterial is super complicated: you have plastic here, metal, plastic again, metal … How do we build that? With a 3D printer,” says Dr Rumpf, the inventor of hybrid 3D printing technology with the only capability in the world to build a three-dimensional object with any distribution of conductors and dielectrics, or other materials.

The research conducted at the EMLab headed by Dr Rumpf has tons of possible applications in the real world. For example, it allows making antennas much smaller – a useful quality for numerous situations, where limitations of space and weight apply. Think spacecraft, wearable electronics and even your cell phone. Rumpf’s EMLab currently has the record for the smallest and most broadband of any 3D-printed antenna.

If we can print things made from several materials – electrical and photonic devices – the world will change. Imagine, if your circuit board dies while in space or if you are in a military situation and your radio dies, and, instead of waiting for replacement you can print those yourself!

“Imagine wrapping a football in wrapping paper without cutting and folding the paper or distorting the pattern. Seems impossible, right? We figured out how to do this and it is letting us unlock physical mechanisms that have been hidden in metamaterials until now,” says Dr Rumpf.

In optics, Dr Rumpf’s team holds the world record for the tightest bend of an unguided optical beam, which is a new way to control light. Also, they are working with optical nanostructures called photonic crystals that can turn off refraction. According to Rumpf, this technology could help radically miniaturise imaging systems and provide them with a really wide field-of-view. This can be used not only in space observation but also in everyday life. For example, optics and photonics technologies provide “the eyes” for self-driving cars.

“Our imaging system, where one camera can have a wider field-of-view could be applied in a self-driving car, instead of multiple cameras. That would simplify the hardware,” says Dr Rumpf.

In the last decades, the world has seen technologies transforming our lives on every level. From using real-time data to organise our travels to remote working and healthcare – we developed habits that were unimaginable just 20 years ago.

According to Dr Rumpf, the most impressive change that he experienced during his lifetime was the emergence of the internet. Another equally transformative technology, according to the scientist, might be 3D printing.

“I am not even talking about everyday life – you could print out an object that you incidentally break, say, in your kitchen. Imagine people in space, on a flight to Mars or Moon. What do they do if a piece of equipment breaks and they need a screw to fix it that they do not have? It’s not very easy to deliver it there, is it?” jokes the scientist from the USA.

Dr Rumpf thinks that the real breakthrough will come when the ability to 3D-print things from several materials will become widely accessible.

“If we can print things made from several materials – electrical and photonic devices – the world will change. Imagine, if your circuit board dies while in space and you can print out a new one. Or, if you are in a military situation and your radio dies. You might be able to print out a new one sooner than the replacement arrives!”, explains Dr Rumpf.

He believes that their advanced slicer – a hybrid 3D printing technology that has become commercially available through his start-up company Kraetonics LLC – can contribute greatly to the change. At the moment, the company provides slicing software that allows 3D-printing of electronics, conformal 3D-printing, off-axis 3D-printing, and 3D-printing of functionally graded material (grading from one to another in the process) that can be used for making armour, ammunitions and for numerous other purposes. Dr Rumpf believes that metamaterials and metasurfaces can become transformational in many ways, however, there still are challenges that need to be solved in these fields.

“A lot of equipment and research that I saw here, at KTU Materials Science Institute labs, indicate that this institution is in a good position to solve these problems. Then I’ll be able to say: hey, I know these people at KTU!”, says Dr Rumpf.

Networking and communication – are among the top skills for a scientist

A pioneer and leader in electromagnetics, photonics, and 3D printing, Dr Rumpf admits that success did not come easy. Having worked in industry for 15 years and in academia for 12 years, the researcher and entrepreneur has developed a support system for young researchers.

“I was the first generation in my family to attempt college, so I made every mistake possible. Then I hired a career coach and a resume writer; I spent a lot of money and learned a lot of things. Now, I am trying to share my knowledge with the students, help them to not make the same mistakes,” says Dr Rumpf.

One of the lectures he gave to the audience of the 24th International Conference-School “Advanced Materials and Technologies” at KTU was on starting and maintaining an awesome career. The world-class researcher believes that professional networking and communication, i.e. talking about and visualising your ideas, are the top ingredients of a successful career. Also, to have an amazing resume, one needs to do amazing things.

“When I went to school, I thought grades were everything, so I was just studying and didn’t get involved in anything else happening on campus. I had good grades, but when I graduated, no graduate school would accept me. That’s why I advise my students: to join organisations, be active, get involved in projects, and volunteer for research labs. If I had anybody to advise me, I’d have spent my university years differently,” says Dr Rumpf.

Getting to know other cultures grow people

During his visit to KTU, he was impressed both by the state-of-the-art research equipment and by the level and motivation of the scientists working at the University labs. According to Dr Rumpf, KTU is on the way to becoming a technology juggernaut – the staff and the equipment are nothing short of world-class.

Dr Rumpf was invited to Lithuania by KTU’s Institute of Materials Science and funded by Baltic American Freedom Foundation.

“I am very thankful to the Baltic American Freedom Foundation. It has been an incredible experience for me,” says Dr Rumpf.

According to the researcher, during the visit, he saw plenty of professional networking possibilities, including common research and student exchange. Also, the scientist says that the Lithuanian trip provided a rich cultural experience.

“You have a lot more history than we do – being a new country we are not used to talking about the events that happened a thousand or 500 years ago. Nowadays, we are becoming more aware of Lithuanian history, but there are many things that we still need to hear and experience,” says Dr Rumpf, stating that getting to know other cultures grows people immensely. 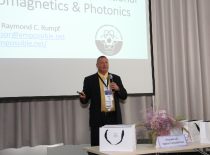 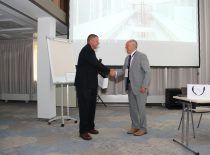 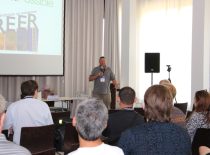 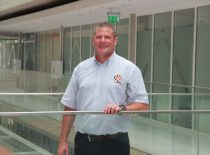 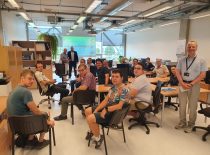 The new exhibition in the centre of Kaunas: KTU crushes gender stereotypes