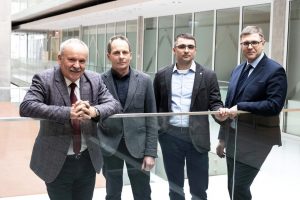 Among the winners of the Lithuanian Science Prize 2019, issued yearly by Lithuanian Academy of Sciences are Kaunas University of Technology (KTU) Materials Science Institute researchers. The award ceremony took place earlier this spring.

Prof Sigitas Tamulevičius, Prof Tomas Tamulevičius, Dr Rimantas Gudaitis and Dr Šarūnas Meškinis received the Prize for their research series on the topic of micro- / nanostructures and nanomaterials for sensors, applications in photonics and energy generation.

The series of research undertaken by KTU scientists is aimed at high technologies and new materials development. In the work, new methods for the formation of diamond-like amorphous carbon films are introduced, also the structure and composition of these films are analysed. In the course of the research, the authors have discovered giant piezoresistance effect: during the deformation of diamond-like amorphous carbon films their resistivity was changing in record proportions. In addition, the authors have developed equipment, which allows organizing the nanoparticles in spaces of macroscopic proportions.

During the celebratory awards ceremony, the researchers were greeted by Lithuanian Prime Minister Saulius Skvernelis, the Minister of Education, Science and Sport Algirdas Monkevičius and other government and science authorities.

No more than 7 Lithuanian Science Prizes, labelled Lithuanian Nobels in humanities and social sciences, natural sciences, biomedical and agricultural sciences and technological sciences field are being issued every year. 26 outstanding research accomplishments were participating in the competition in 2019.