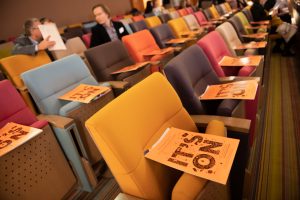 Two major events took place in Brussels concerning ECIU University and European Universities Initiative in general on March 4. The late morning the mayors of cities of ECIU partners gathered in Brussels to discuss cooperation with ECIU University, especially, how can universities and regions grow stronger and attract more EU funds. Later in the afternoon, the discussion was taken further at the first high-level event on the Future of European Universities.

During the conference, the ECIU University Innovation Box was prepared for the meeting and contained samples of important university-rooted innovations. Kaunas University of Technology (KTU) presented the new world record for a tandem solar element and silver luck coin with a hologram.

The world breaking tandem solar cell of 29.15 per cent efficiency is now the new world record for a tandem solar element. The record-breaking solar cell made of the semiconductors perovskite and silicon was developed by Lithuanian and German researchers. The silver luck coin with a hologram is the joint product of KTU‘s Institute of Materials Science and the Lithuanian Mint, using the Institute produced nickel shim, which was created according to the unique graphical image.

Educational innovation is a shared responsibility

“Is Europe ready to truly innovate its higher education? Is Europe ready to support new types of educational innovations?” 150 attendees discussed these and other important questions on the future of the European Universities at the Conference in Brussels.

Themis Christophidou, Director-General for Education, Youth, Sport & Culture, gave the keynote at the event. She invited European universities to be ambitious and said that Europe is ready to support bold educational innovations. 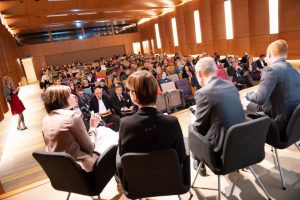 “ECIU is extremely enthusiastic. It is telling that you are already calling yourselves a university, rather than an alliance or something similar. You were selected because you dare to take risks and explore uncharted paths. Is Europe ready? Yes! Europe is on board. Now is the time to deliver and ask for support from funds and national governments. In this manner, we can sow our seeds in fertile soil and reap the rewards in the long run”, said Christophidou.

ECIU is an international organisation that places the challenge-based approach as a core for its pedagogics, research and innovation.

“We see major potential in the micro-credentials. It satisfies a need our society has. In the coming months, we will explore ways to facilitate quality assurance for a European Degree and establish an EU framework for micro-credentials. We will work with you. Step by step. Your success is our success. You are a role model. The blueprint is set. It is time to put it into practice and be the great innovator you have always been”, – she notes.

Questions regarding funding, students and research were also raised. What would an integrated financial model for European universities look like?

“At the moment, there is no clarity about the EU budget after 2020”, says Elena Tegovska, Team Leader Higher Education and Erasmus+, DG Education, Youth, Sport and Culture. “We hope that these pioneering universities can elevate their respective national level as well as part of the educational development process.”

According to Kristina Ukvalbergienė, the Director of the Department of Academic Affairs and institutional coordinator of ECIU University at KTU, it is important to note that to reach ambitious goals ECIU needs European Commission (EC) involvement and national authorities support.

“KTU together other ECIU member universities are very enthusiastic about the European Universities initiative, however, there are several challenges that should be addressed in order to have success in this initiative. Firstly, such ambitious goals require the full support of the European Commission and national authorities and this will require changes in both EU and national regulations. Secondly, there should be a long-term commitment by the European Commission and by this, we mean European base funding for this initiative after 2022. Thirdly, sufficient support is needed for research activities”, says Ukvalbergienė.

Also, today European Universities are mostly supported for their education activities, but what about their research mission?

“European universities need a research mission to be full-fledged universities. Moreover, they are perfectly placed to raise the competitiveness of the European Research Area. What should this research support look like?”, says Van Velthoven. 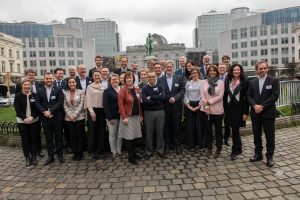 Earlier that day, mayors and the regional top management from all ECIU regions, gathered in Brussels to discuss better finance, region uniqueness, smart regions, interregional of the ECIU University.

With a letter of support, Kaunas District municipality, and Kaunas City Region Municipality, professed its support for the establishment of a European university. However, Maarten van Steen, chairman of the ECIU Smart Regions working group, believes that this ambition can be taken a few steps further still.

“The better a region is organised, the more it can benefit from EU funds. For example, when regions can draw up an up-to-date list of businesses so that when the European Union issues a call, they can quickly find out to whom it might be of interest”, she notes.

The EU has various funds dedicated to regional development. The available budgets are currently being reassessed and the next long-term budget will run for seven years from 2021 to 2027 and will invest substantially in climate- and environment-related objectives.

Normunds Popens, Deputy Director-General of DG Regio, gave a keynote and stated that the so-called Green Deal represents an enormous transition for some regions: “Some regions have no idea how to innovate. We are there to lend a hand.”

“Many of ECIU partner universities were formed to compensate for economic decline. Today, they give their regions a socio-economic boost”, Van Steen explains that these universities are in a so-called “rurban” region: they are rural regions with solid centres.

According to Van Steen, these regions require different attention – not Smart Cities, but Smart Regions – and this is backed by a special ECIU Smart Region Agenda.

“I developed this agenda together with my ECIU colleagues who are leading the research in their universities. With it, we give the European “rurban” regions and the digital issues they face the attention they need. Later this month, we will have the opportunity to present the agenda in the Council of Europe in Strasbourg”.

The mayor of Enschede, Onno van Veldhuizen, is one of the initiators of the gathering. “The city is important to the university and vice versa. When a university scales up, it is important to involve the cities and the region in that process. For ECIU, it is good that universities and cities work together. This might well turn into the largest living lab in all of Europe.”

KTU, Kaunas City and Kaunas District Municipalities representatives did not attend ECIU University events because of the threat of the coronavirus pandemic. However, KTU’s contribution was visible at the event: KTU’s innovations were presented to attendees, design and communication specialists prepared visual material for the meetings and helped with the communication on social networks.