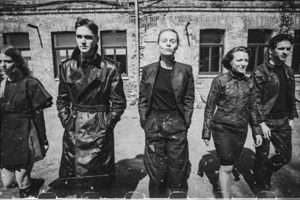 This Sunday, May 29, a unique performance, “Kaunas Spring’72” will be shown on the Kaunas National Drama Theatre stage with a simultaneous English translation provided by Dainora Maumevičienė, associate professor at the KTU Faculty of Social Sciences, Arts and Humanities. The stage play is inspired by the 1972 events in Kaunas.

“Kaunas Spring’72” is written by Jonas Tertelis and Andrius Jevsejevas, and directed by Tertelis. In the play, the creative team discuss past events in the present context. The performance is a part of the Kaunas European Capital of Culture 2022 programme.

“Many people know the name and personality of Romas Kalanta. There are many stories about those events, some people are still alive. However, telling stories is one thing and collecting the facts is another. Therefore, we entrusted this project to the director Jonas Tertelis, who has experience in creating documentary-based productions,” says Egidijus Stancikas, the General Director of the National Kaunas Drama Theatre.

The main axis of the performance is a real event, the self-immolation of Romas Kalanta, which took place 50 years ago, on May 14, 1972. On that day, in the name of the protest against the soviet regime, a 19-year-old high school student set himself on fire in the Kaunas City Garden, and after this act of self-sacrifice, a wave of youth resistance to the soviet government and power structures rose. However, the work shifts the focus from the personality of Kalanta to the society around him and the context surrounding his act of protest. 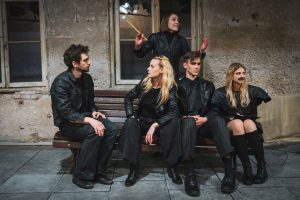 “We decided to let Kalanta remain a symbol and not to try to act out his personality. Instead, we are attempting to understand the context of those days and to find a way to tell this story to the young people living in contemporary Lithuania. We leave documentaries and opinions to historians; in the play, we ask: how to remember, and understand things we did not participate in? There are more than one perspective and topic to discuss: there were protests, there was an individual act of resistance to the regime, suicide, and the consequences to the society. There is no single question and no single answer,” says Tertelis, the director of the “Kaunas Spring’72”.

The playwright Andrius Jevsejevas, whose main task was to collect material for the play, said that the search lasted until the last days: “The event is very engaging, little is known about it, so there is an inner desire to discover something more. In comparison to the events of spring 1968 in Prague or autumn in Budapest in 1956, there are fewer facts and visual information concerning the Kaunas events on May 18-19 in 1972. However, these gaps in the history make one want to fill them in with content.”

Reflecting on the context of those days, the creative team thought about the reasons why it happened and talked about the events in Hungary, Czechoslovakia, about the Sąjūdis.

“The war in Ukraine, which started with the rehearsals, forced us to look at history and events in a different way because that history is still affecting us, it is something that has not been resolved yet,” says Jevsejevas.

The characters of the play are dressed in black stylised clothes, the elements of scenography are a fragment of a concrete street, a monolith. The artist Renata Valčik said that she wanted to reflect the aesthetically faceless period, when all towns and cities were equal, with identical colours and layouts.

Translation of plays: the longstanding KTU’s cooperation with the Theatre

The play should be especially interesting to the international audience, as the events in Kaunas in spring 1972 are not well known. Today, after 50 years it is about the time to start talking about this period of Lithuanian history, which is still very painful to remember to most.

Its simultaneous translation is provided by Dainora Maumevičienė, associate professor of the KTU Faculty of Social Sciences, Arts and Humanities.

“The experience of translation of a theatre play is completely different from, say, interpreting during the conference or business meetings. A play is a living organism. You must act fast, for example, to decide what to do, if the actors on stage all talk simultaneously,” says Dr Maumevičienė.

KTU teachers and students have been collaborating with Kaunas National Drama Theatre for many years, simultaneously translating and surtitling the stage plays into English. This cooperation helps international Kaunas guests to better understand Lithuanian culture and for the students it provides a hands-on practical exerience.

After the play, to get more into the context of those days, we recommend you to visit the exhibition “1972: Breaking Through the Wall” in Kaunas Central Post Office, which explores life in the soviet times Lithuania from the point of view of arts.

The premiere of “Kaunas Spring’72”, written by Jonas Tertelis and Andrius Jevsejevas, and directed by Jonas Tertelis will be shown in The Long Hall (Kęstučio g.62) on Sunday, May 29. Simultaneous translation from Lithuanian into English will be provided. Tickets here.