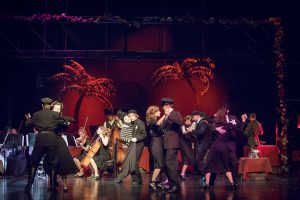 In the peak of the dark season while waiting for Christmas Kaunas National Drama Theatre is inviting to bring light into your life by immersing into arts. This season three theatre plays will be shown with English translation.

Research shows that people who engage into arts by playing musical instrument, dancing, painting or just going to the theatre or concerts are less likely to suffer from depression. The study involved nearly 50 thousand individuals from all socio-economic backgrounds. Dark season is known as “winter blues” season, so it’s worth to try and work on cheering yourself up.

Among the plays with English surtitles will be Ghetto, the new play of Kaunas National Drama Theatre directed by Gintaras Varnas. Written by Joshua Sobol the play tells the emotional story of Vilnius ghetto people, who came up with seemingly impossible idea under the circumstances of establishing ghetto theatre. The theatre in the face of death became their beacon of inner strength and resistance. The play is based on real events.

“There are many posters, not only theatre posters left from Vilnius ghetto. So we know that lectures, literature, poetry, musical events were taking place. People didn’t believe that there is no hope. I think they were trying to avoid spiritual degradation”, says Aleksandra Jacovskytė, the costume artist of the play.

Ghetto with English surtitles will be shown on stage on Friday, December 28 at 6 pm and on Friday, February 8 at 6 pm.

Other plays with English surtitles this season are:

Shakespeare’s Hamlet, shown on Wednesday, January 16 at 2 pm and on Thursday February 14 at 6 pm

In order to ensure the best visibility of the surtitles, the Theatre highly recommends the seats above the 12th row.