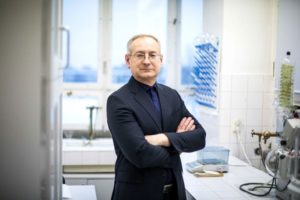 KTU Faculty of Chemical Technology Professor Vytautas Getautis in a science world is mostly known for achieving a world record of solar cells’ efficiency. Developed together with other researchers, this solar cell can convert 29.15% of incident light to electricity. On December 11, the study, describing the production of the record-breaking cell, was published in Science Magazine, one of the major scientific journals in the world.

The professor of Kaunas University of Technology is the author of several patented inventions which are used by various companies operating in countries around the world. He is convinced that teamwork and the skills of each team member are essential in achieving such results.

He says that it is impossible to learn all inside secrets in a short time and is comparing chemistry to cooking. It would take much longer to cook a delicious lunch in a kitchen at your friend’s house, compared to your own. It is necessary to know where all the ingredients and utensils are, how to organise and to carry out this experiment.

According to the professor, team members that work in harmony can understand each other from a brief comment or even from a glance. Also, everyone should come to the laboratory with enthusiasm and a desire to achieve significant results. Only then, one can be proud of their achievements.

How did you find yourself interested in chemistry? What were the main factors that encouraged you to work in this field?

At school, I mostly enjoyed exact sciences although I did equally well in all subjects. When I had to choose a higher education institution, I never doubted it will be Kaunas Polytechnic Institute (now – Kaunas University of Technology). A local friend with whom I have played in Skaudvilė (Tauragė municipality) high school orchestra at the time studied at the Faculty of Chemical Technology and suggested I should enrol there too. However, a deeper interest in chemistry was sparked by the late professor Stasys Kutkevičius. During my first year, I was brought to his research group by the professor’s daughter who was my classmate. He devoted so much of his time to the newbie chemist, and therefore I gradually entered the mysterious world of science. That’s how it all started.

What for you is chemistry? What fascinates you most in this field?

There is no such field of human activity in which chemical reactions wouldn’t take place or the substances created during chemical experiments weren’t applied. This is the one area of science where discoveries follow each other almost every day. It is the diversity, the surprises, the opportunity to create a new product quickly, and sometimes to get something else than you expected – that is fascinating.

How did you choose to become a scientist?

Since I spent most of my free time in a research lab while studying, it was not difficult to discover my path after graduation – I entered the postgraduate program (equivalent to the current doctoral studies), which under the supervision of Prof Kutkevičius, I have successfully finished. This period was very dynamic and full of challenges: it was necessary to carry out all the planned experiments, to write a dissertation and to defend it in just three years. However, it further strengthened my choice and desire to continue down this path.

You are the author of many patented inventions. How does inspiration for new inventions come to you? What is most important in this process?

The ideas for new inventions are born in quite different ways. In chemistry, sometimes it’s an unexpected turn in a planned experiment when you get a result that is not exactly what you expect. After finding out what happened, it sometimes turns out that it is not yet described anywhere, has not been published, and has practical application.

However, most ideas come from targeted projects. For example, the contract with the South Korean company Samsung Electronics set a specific number of international patents. I had to read and to analyse a lot of scientific literature to understand what has already been done in a particular field.

Ideas come from various discussions with colleagues in scientific group seminars and conferences. I often joke with my doctoral students that they have to bring back a new idea every time they come back from a conference. It will not necessarily become an invention, but it will certainly encourage to move towards it. For me, running inspires me, so sometimes the idea of an invention comes up while jogging.

How significant is the team for research work? What is required for efficient teamwork, and how are the great achievements done?

A close-knit team is fundamental in research. Ideally, all the members of the group should have followed a similar path to mine, meaning that they started their research in a scientific laboratory from their first year at the university. This is necessary, because in this area of science, it’s not possible to learn all the ropes in a short time. I compare chemistry with cooking – it takes much longer to cook a delicious lunch in a kitchen of your friend, than in your own. It’s necessary to know where all the ingredients and utensils are, how to organise and to carry out the experiment. At first, even washing chemical dishes correctly without the help of an older colleague will not be easy.

However, the colleagues who know each other well, can understand each other from a brief comment or just a glance. The team leader needs to know every member of their team and to assign tasks that suit their qualifications. However, the essential thing is to get the young researcher interested so that the work is not dull. We need to make sure everyone goes to the lab willingly. Then the team activities will be efficient, and the work will allow you to enjoy the results.

For many years, you and your team have been working to make solar energy cheaper and more efficient. While working with physicists at the Helmholtz-Zentrum research institute in Berlin, you set a record this year – the solar cell you create converts 29.15 percent of incident light to electricity. How significant is this achievement?

First of all, it is the highest efficiency indicator of a tandem silicon and perovskite solar cell in the world. This solar cell is constructed by combining current technologies and a new generation of solar cells. In this case, the two components complement each other. The silicon element perfectly absorbs infrared electromagnetic radiation whilst the perovskite element absorbs visible radiation. In the end, we obtain the overall efficiency which is higher than the efficiency of the individual component.

The self-contained organic semiconductors we offer are inexpensive. They cover the electrode of the solar cell with a thin, only a few nanometers thick molecular layer which consumes a very small amount of material. We have calculated that 1 gram of this semiconductor can cover a surface area of 1000 m2. It is also important that the development of silicon-perovskite tandem solar cells utilises the existing production capacity of silicon solar cells, so the business will not need significant additional investment.

The first license for the invention was acquired by the Japanese company Tokyo Chemical Industry Co. Ltd. Are there any others interested in your invention?

The organic semiconductors we developed were firstly commercialised by the Japanese after obtaining a patent license. However, the demand for these compounds was so high in the first year that the Swedish company Dyenamo AB also became interested in them. Negotiations have been going on for some time, successfully led by Greta Žėkienė, Project Manager of Intellectual Property Management at the KTU National Innovation and Entrepreneurship Centre. Recently, we were informed that Dyenamo has bought our patent license.

What is next in your research on solar cells? What goals have you set for yourself?

So far, we have paid more attention to p-type organic semiconductors. It was due to this type of self-assembled molecules that the above results were achieved. However, there are several layers in the solar cell between the electrodes that perform different functions. Thus, in addition to p-type semiconductors, n-type are also required to transport the electrons. Therefore, our goal is to develop n-type self-assembled organic semiconductors, which would allow us to abandon traditional layer-making technologies and, together with the already discovered p-type semiconductors, be used to construct even more efficient solar cells.

Yes, this is the fastest growing technology in this area. This is well known in Lithuania, as well as in our university. It is enough to mention the recent emergence of 5.5 thousand square meters solar power park on the roof of KTU Faculty of Electricity and Electronics. The commercial silicon solar cells with the efficiency mark of 18-20% have been installed here. Meanwhile, tandem elements, which are expected to hit the market next summer, should significantly outperform them in their efficiency (it should be around 28%).

It is for achieving the global record of the efficiency of solar cells, you have been nominated in the “Discovery of the Year” category of the LRT Annual Awards. Is such an assessment important to you?

Of course, it’s nice. The very entry between the three nominees is already a recognition of the research results of our entire team. At the same time, it shows that KTU conducts high-level research. Also, the nomination serves as a great advertisement for sustainable energy.

Which of your achievements in chemistry seems the greatest to you?

Personally, my first invention owned by KTU together with the Federal Polytechnic University of Lausanne is the dearest to me. This is the first semiconductor coded V-886 to be successfully commercialised in our research group five years ago. Until then, many of our inventions were owned by well-known foreign companies, such as Samsung Electronics (South Korea), Imation (USA), BASF SE (Germany), Trinamix (Germany), where research was carried out following the order of these companies. And the most significant achievement of our group is the latter, which was nominated in the “Discovery of the Year” category of the LRT Annual Awards.

The article by KTU researchers – you, Artiom Magomedov, Tadas Malinauskas and Ernestas Kasparavičius – was accepted by the world-famous scientific journal Science. What article will be published there? How significant is such an achievement?

We have already received the confirmation that an article publishing a record of the efficiency of a tandem solar cell has been accepted in ‘Science’. We also know the tentative date of the issue of the journal, in which the article will be published, which is December 11, 2020. For us, this event is perhaps even more significant than the recognition of an invention as a patent or the sale of a license because every scientist has a dream and a desire to publish the results of his research in such a prestigious journal.