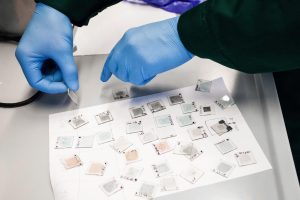 While the need for renewable energy around the world is growing exponentially, Lithuanian and German researchers have come up with a novel solution for developing low-cost solar technology. Material, synthesised by Kaunas University of Technology (KTU), Lithuania scientists, which self-assemble to form a molecular-thick electrode layer, presents a facile way of realising highly efficient perovskite single-junction and tandem solar cells. The licence to produce the material has been purchased by a Japanese company.

According to scientists, achieving perovskite-based solar cells, combining low price and high efficiency, has proven to be hard endeavour in the past. The particular challenge in large-scale production is the high price and limited versatility of the available hole-selective contacts. KTU chemists have addressed this challenge.

“Solar element is akin to a sandwich, where all of the layers have its function, i.e. to absorb the energy, to separate the holes from electrons, etc. We are developing materials for the hole-selective contact layer, which is being formed by the molecules of the materials self-assembling on the surface of the substrate”, explains Artiom Magomedov, PhD student at the KTU Faculty of Chemical Technology, co-author of the invention.

Developed monolayers can be called a perfect hole transporting material, as they are cheap, are formed by a scalable technique and are forming very good contact with perovskite material. The self-assembled monolayers (SAMs) are as thin as 1-2 nm, covering all the surface; the molecules are deposited on the surface by dipping it into a diluted solution. The molecules are based on carbazole head groups with phosphonic acid anchoring groups and can form SAMs on various oxides.

According to the scientists, the use of the SAMs helped to avoid the problem of the rough surface of the CIGS cell. By integrating a SAM-based perovskite solar cell into a tandem architecture, a 23.26%-efficient monolithic CIGSe/perovskite tandem solar was realized, which is currently a world record for this technology. Moreover, one of the lately developed SAMs used in the Si/perovskite tandem cell achieved the nearly record-breaking efficiency of 27.5%.

“Perovskite-based single-junction and tandem solar cells are the future of solar energy, as they are cheaper and potentially much more efficient. The limits of efficiency of currently commercially used silicon-based solar elements are saturating. Moreover, the semiconductor-grade silicon resources are becoming scarce and it is increasingly more difficult to extract the element”, says Professor Vytautas Getautis, the head of the KTU research group behind the invention.

According to Magomedov, the amount of solar energy reaching the surface of the earth in one hour could be enough to cover the yearly need of the electricity of all humankind.

“The potential of the solar energy is immense”, says the young researcher.

Using traditional technologies, 1 g of silicon (Si) is enough to produce only a couple of square centimetres of the solar element; however, 1 g of the material synthesised at KTU is enough to cover up to 1000 m2 of the surface. In addition, the self-assembling organic material synthesised at KTU is significantly cheaper than the alternatives used in photovoltaic elements currently.

The team of KTU chemists has been studying the use of the self-assembling molecules in solar cells for a couple of years. The material, synthesised at KTU, was applied in the production of a functioning solar cell in collaboration with Helmholtz Zentrum Berlin (HZB), Germany and Centre for Physical Sciences and Technology (Lithuania) physicists.

The licence to produce the material synthesised at KTU laboratories was purchased by a Japanese company; the material called 2PACz and MeO-2PACz will soon appear in the market. This means that innovative technology using self-assembling compounds can be further researched in the best laboratories of the world and eventually find its way into the industry.