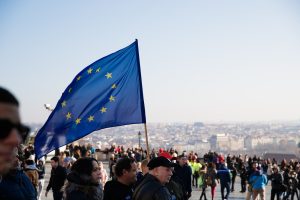 Geopolitical tensions, the pandemic, and rapidly evolving digital technologies have clearly shown the European Union’s (EU) dependence on countries outside of the EU in various areas. In recent years, the initiatives developed by the European Commission and the planned investments are aimed at strengthening Europe’s strategic autonomy – economic, industrial, and other sector-wide resilience.

While speaking at the BMDA conference at Kaunas University of Technology (KTU) Paul Timmers, a research associate at the University of Oxford and professor at European University Cyprus, stated that these endeavours indicate a threat to the EU’s authority.

“We are challenged very much as a community, as policymakers, as businesses, and as academics to provide answers for pressing problems, including the challenge of sovereignty and autonomy. Sovereignty is something that has come to the top of political agendas because it is under threat due to rising international tensions between the US, China, Europe, and Russia. The sovereignty gap emerges when the system of states is misused, and new or already existing actors do not respect the international law,” says Timmers, a former Director at the European Commission for Digital Society, Trust & Cybersecurity.

The debate about sovereignty in the European context started around 2016-2017, triggered by the American elections and the rising tensions with China and Russia. Yet the geopolitical matters are not the only thing stimulating the continuous talk about autonomy’s importance: digital transformation and dominance, the rise of digital platforms but also the disruption that digitalisation brings to everyday users as well as to governments.

“With the digital platforms that have become so dominant, we see that they actually determine what information is spread, including the disinformation that might undermine a country’s democracy,” says Timmers.

The professor expresses that the sovereignty gap affects all participants of the conversation – it is not only a local problem but a unifying threat that has to be confronted together.

“Cybercrime, climate change, Covid-19 pandemic has no borders and does not depend on the country you are in. It’s happening everywhere. Today’s energy crisis is a good example of a kind of threat that hits all countries and that undermines the legitimacy of governments, creating a problem for state sovereignty. Governments are struggling to convince their citizens that they have an answer to this energy crisis, which is much bigger than any individual country,” says Timmers, who is currently Senior Advisor at the European Policy Centre (EPC) Brussels.

Digital resources are included in the new concept of sovereignty

While the political concept of sovereignty is perceived as having a dominant power or authority and, in modern democracies, remains with citizens and is exercised through representative institutions, in the EU context, sovereignty is divided into different levels. EU enabled separate states to share their sovereignty and, through the treaties, transferred it to the European level. Various initiatives as well as digital solutions, produced or applied within the EU, legitimised the shared principle.

“The question is: how do you make sure that the designed governance instrument is an even win for all? Perhaps the European level wins, and the national level loses. A great example of the European asset that has been developed to make sure that states can do proper public health management is the COVID pass, used by millions of people. It doesn’t decrease the sovereignty of any member state. It is a European asset that enhances the credibility of the EU and the legitimacy of it,” says the professor.

According to Paul Timmers, such resources contributed to the strength of the alliance: “If you think about it, no one has lost their sovereignty. Europe has become stronger internally and externally, so there’s a different kind of perception of sovereignty.”

Thus, the term exceeds its usually perceived elements: territorial integrity, internal legitimacy of foundational institutions, and external recognition and acceptance of foreign states. In rapid digitisation, other variables must be accounted for.

“If you question what sovereignty is, think about your situation: what is the “country” and who is “us”? What belongs to us? Is it only the theoretical aspect of the country or perhaps the culture and values? Is it the natural resources, the oil you may have in the ground, the land, or the sea? Or is it also the digital resources? And today, we would say: it is also digital. For example, your health data may be a part of the concept of sovereignty,” says Timmers.

To realise sovereignty and to act upon it through the decision-making and implementation regarding national and foreign policies, one has to have strategic autonomy – the ability to choose when and where to act with like-minded partners, if to act at all. Strategic autonomy in the context of the EU is concerned with being able to reject policies that threaten the autonomy of the union while maintaining cooperation with partners in other areas.

“You often hear the term “digital sovereignty” which is strategic autonomy in the digital domain in order to safeguard and strengthen our sovereignty. We need to have a sufficient understanding of what value comes from our digital data and be able to protect it. Furthermore, it is about having strategic autonomy regarding your industry,” says Timmers.

Digital, industrial, and international relations policies here take a central position. The EU Chips Act, the Digital Markets Act, the European Digital Wallet, and other initiatives naturally involve businesses and citizens of the member states, unifying the regulations across different countries and reducing the external dependencies in today’s hostile environment.

“For companies, there is no place to hide from geopolitics, the planet, the technological changes, so you have to better anticipate and benefit from it by redesigning your business models for resilience. Think about the strategic options of “just-in-case” next to “just-in-time”, and analyse from whom you buy because you might be creating dependencies. Partner with governments, because they are really interested in sovereignty and they are putting big money into that,” he advises.

Paul Timmers says that the futuristic approach of companies is values-based, open, and global, which is already taken by such companies as BMW, OVH, and solutions such as the digital wallet.

The challenge is here to stay

Strategic autonomy also concerns citizens because the link between people and the sovereignty of the state is at the heart of democracy. The professor suggests that it is crucial to empower citizens in their individual sovereignty when discussing digital ID and the digital wallet and to educate them on the perception of Europe and its values.

“There was a recent survey that asked around 20 thousand people and presented opinions on how the EU will look in the future. Europeans expect the EU to play big in the world of affairs on several fronts, including climate, peace, human rights, and military policies. They also think that the trust in the political system’s potential is high, but short-term expectations and trust in political actors is low,” says Timmers.

But the trust will have to be rebuilt: the sovereignty challenge will not be solved quickly. The professor emphasises that the challenge is concerned with our freedom today as well as in the future: “Digital is really a trailblazer – it disrupts the established order in many areas, but realising sovereignty in the digital age is a privilege and an opportunity that should not go to waste”.

Paul Timmers was a keynote speaker at the 20th Baltic Management Development Association (BMDA) conference, organised by BMDA together with Kaunas University of Technology School of Economics and Business (KTU EVF). The international event, which annually brings together hundreds of leaders of higher education institutions, business representatives, and public figures, examined the importance of digitisation for the economic and social ecosystem and the role of the business and academic sector in the context of geopolitical changes.

The participants of the conference, which took place on 5–7 October 2022, listened to the speeches of world-renowned experts, debated on geo-economic and geopolitical challenges in panel discussions, and strengthened mutual relations during interactive workshops.