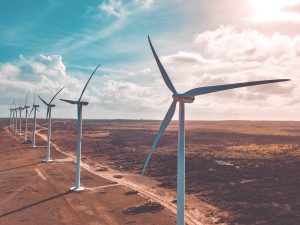 A group of researchers from Kaunas University of Technology (KTU) and the Lithuanian Energy Institute proposed a method for wind turbine blades’ recycling. Using pyrolysis, they broke the composite materials into their constituent parts, i.e. – phenol and fibre. According to scientists, the extracted materials can be reused, and the process is virtually waste-free.

Wind turbine blades made from glass fibre-reinforced polymer (GFRP) laminate composites can serve for up to 25 years. After that they end up in landfills – GFRP is recognised as hard-to-break-down. This has become a real challenge for the renewable energy industry.

Wind turbine blades can serve for up to 25 years. After that, they end up in landfills and this has become a real challenge for the renewable energy industry.

“The aim of cutting global greenhouse gas emissions to close to zero by 2050 has been voiced several years ago. Since then, more and more countries have been committing to the net-zero goal by investing in renewable energy resources, including wind energy. However, the recycling of the wind turbine blades, which are as long as a football field, very sturdy and include plastic, is the main problem. Without a feasible solution to it, we cannot say that wind energy is fully sustainable and environmentally friendly,” says Dr Samy Yousef, a researcher at Kaunas University of Technology (KTU), Faculty of Mechanical Engineering and Design.

Aiming to tackle this challenge, the research group headed by Dr Yousef have made several experiments involving decomposing GFRP into its constituent parts.

Due to its strength, shaping simplicity and low manufacturing costs GFRP composites are used for a multitude of purposes – for car manufacturing, maritime vessels, oil and gas production, construction, sporting goods and more. Aircraft, wind energy and electronics are among the industries which use the GFRP most, with the global demand increasing annually by 6 per cent.

“GFRP composites used for many industries including wind turbine blades manufacturing are either thermoset or thermoplastic. In either case, they roughly consist only of two components – fibre and resin (in some cases with different micro or nanoparticle additions). As for the fibre, it usually is carbon fibre or fibreglass (the latter is cheaper)” explains Dr Yousef.

During the experiments, the research group were applying pyrolysis (in presence of zeolite catalysts and without) to different batches of composites – fibreglass thermoset and fibreglass thermoplastic – measured the extraction of phenol (the primary component in the production of phenolic resins and the manufacture of nylon and other synthetic fibres) in each case. After that, they were analysing the basic raw materials from each batch. The researchers also assessed the effect that the additive nanoparticles (such as carbon black) can have on the yield of useful components.

“We would of course be happy to receive a worn-out wind turbine blade, which is no longer usable, and to conduct our experiments with the samples obtained from the real object,” says Dr Yousef.

Although the yield of the components extracted during pyrolysis differs depending on the temperatures applied, the proximate measurement revealed that in all the cases the numerous volatile compounds (up to 66 per cent) and fibre residue (around 30 per cent) were extracted. The added fibre nanoparticles (Carbon nanotubes and graphene) increased the yield of phenol.

“The volatile components are basically phenol, which can be used for further production of resin, and the fibre residue can have numerous applications after purifying it chemically – for fibre-reinforced concrete, polymer composites, fibre flooring. Our method is virtually waste-free with some small emissions, which is standard in this kind of conversion operation,” says Yousef.

The experiments were conducted using the samples prepared at a laboratory that had compositions similar to those used for making wind turbine blades, and not the wind turbine blades themselves. Therefore, Dr Yousef notes, there is a need to assess the effect of the paint coating, that the real turbine blades are covered with, to the results. However, he believes that it will not be significant.

“We would of course be happy to receive a worn-out wind turbine blade, which is no longer usable, and to conduct our experiments with the samples obtained from the real object,” says Yousef.

At the moment, the research group is creating a model, which would allow to scale and calculate the wider economic and environmental impact of the results.

This study is one of the several conducted by the same research group, which focus on the practical implementations of the principles of the circular economy. Last year, their experiment of lint microfibre conversion into energy received broad international attention.

“We are developing research in numerous topics related to climate change, extracting of clean energy (H2 and CH4) using membranes technology, and transition to the circular economy as these topics are closely related to the future of our planet,” says Dr Yousef.