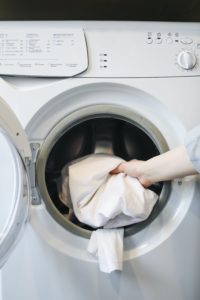 Towards circular economy: European manufacturers are not sufficiently reporting on their actions
Important
Scientists: circular economy is not only about recycling
Important
KTU researcher from India: Kaunas has changed immensely
Important
International Researchers Are Feeling at Home in KTU Laboratories
Important
Ana Rodrigues, PhD student from Portugal: with more of us the environment will change
Important

A team of scientists from Kaunas University of Technology and Lithuanian Energy Institute proposed a method to convert lint-microfibers found in clothes dryers into energy. They not only constructed a pilot pyrolysis plant but also developed a mathematical model to calculate possible economic and environmental outcomes of the technology. Researchers estimate that by converting lint microfibers produced by 1 million people, almost 14 tons of oil, 21.5 tons of gas and nearly 10 tons of char could be produced.

Each year, the global population consumes approximately 80 billion pieces of clothing and approximately €140 million worth of it goes into landfill. This is accompanied by large amounts of emissions, causing serious environmental and health problems. One of the ways to lessen the footprint of consuming clothes is to reduce the laundry impact. During a machine-washing process of textile, around 300 mg of microfiber are generated from 1 kg of textile.

“Lint-microfibers are classified as microplastics. Whereas large plastic items can be sorted out and recycled relatively easily, this is not the case with microplastic – tiny plastic pieces, less than 5 mm in diameter. Large quantities of microplastic are being washed down our drains and enter our seas threatening the environment”, says Dr Samy Yousef, senior researcher at Kaunas University of Technology (KTU), Faculty of Mechanical Engineering and Design.

Around 70 per cent conversion rate

Dr Yousef is the leader of the inter-institutional team, which developed an eco-friendly technology to extract energy products from textile waste. For the experiment, lint-microfibers collected from the filters of the drying machines in the dormitories of KTU were collected. As the residents of the dormitories come from different cultures in Europe, Africa, Asia and America, the collected samples were very diverse. Using a pilot pyrolysis plant, built at the laboratories of Lithuanian Energy Institute, the scientists were able to extract three energy products – oil, gas and char – from the collected lint-microfiber batches. When treated thermally, the lint-microfibers decompose into energy products with around a 70 per cent conversion rate.

“When we think about textile waste, we usually imagine long fabric with high crystallinity, which is contaminated with dye and dirt. Much energy is needed to turn the solid waste into liquid. However, lint-microfiber is a somewhat ‘broken fiber’ textile waste; it has a uniform size and shape, contains a lot of flammable compounds (resulted cotton and polyester elements), its transformation is easier”, says Dr Yousef.

Researchers also developed a mathematical model to evaluate the economic and environmental performance of the suggested strategy, based on the lint-microfibers generated by 1 million persons. The study shows that if applied on an industrial scale, the strategy is profitable and eco-friendly: the energy from the lint-microfiber generated by 1 million people has estimated profitability at around €100 thousand and reduced carbon footprint 42,039,000kg CO2-eq/t of lint-microfibers.

Would accelerate the transition to circular economy

“I believe that the collection system, similar to deposit-return for drink containers, could be developed based on our research. A household would bring the lint-microfiber from their drying machine filters to a collection point and receive some kind of compensation for it. We have proposed the technology and made calculations, which may be developed further”, says Dr Yousef.

According to research, lint-microfibers can be considered a renewable energy source that ensures sustainability and accelerates the general transition of the textile industry to a circular economy. In addition to the study described above, Dr Yousef and his research group have developed other green/eco-friendly technologies to extract cotton, glucose, and energy products from textile waste and end-of-life euro banknotes using mechanical, thermal, chemical, and biological treatments.

The article “A new strategy for using lint-microfibers generated from clothes dryer as a sustainable source of renewable energy” by Samy Yousef, Justas Eimontas, Kęstutis Zakarauskas, Nerijus Striūgas, Alaa Mohamed was published in Science of The Total Environment, Volume 762, 2021.

The project has received funding from the Research Council of Lithuania (LMTLT), agreement No. S-MIP-20-27.