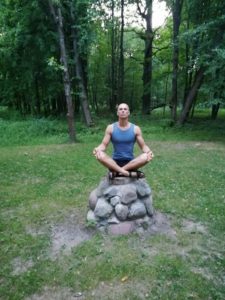 Admissions to Autumn 2021/2022 are now open
Important
Gavin Stewart: good communication is the key to success
Community
Creative Side of Technology: new exhibition in Kaunas centre
Important
Arvydas Grišinas: it has always been difficult to isolate creativity from technology
Important
Antanas Jasenka: music, first and foremost, is science
Important
KTU Graduate Grammy nominee: I have a truly amazing job
Important

KTU student about creativity: I realized that things done for the sake of others are the most meaningful

“Music is the light in the darkness”, Frank Sinatra once said. These words guide Tomas Rimkus, a Music Technologies student at Kaunas University of Technology (KTU) Faculty of Social Sciences, Arts and Humanities. Tomas is currently learning how to play the guitar, dreams of learning to sing and dedicates a lot of time to painting and writing.

Tomas recently donated a painting to the Faculty’s community, which depicted the main character of Antoine de Saint-Exupéry’s “The Little Prince”.

“I was inspired by the screening of the Little Prince, when during sunrise he becomes himself again, breathes in, closes his eyes and remembers his beloved rose”, says Tomas. He mentions that in the painting, he also included the myth of Icarus.

“How are music, painting, and writing related? Self-expression and a great desire to do it”, says Tomas. He says that painting came into his life three years ago: “I bought canvas, paint, brushes, and tried painting.”

Even though Tomas still lacks the experience to draw what he sees in his imagination, painting helps him express his own perception of the world.

“I decided to keep painting as a hobby because it is fun to give paintings to other people”, says the student. When asked what he likes painting the most, Tomas admits that he is still looking for what would suit him best.

“I often ask myself what I would like to draw, I meditate, or I dream of a painting and then try to depict it on canvas”, he describes his painting process.

To Tomas, poetry is a way of expressing feelings.

“Through poems, I want to uncover a different side of feelings’ spectrum, I create hints to uncertainty and its synthesis with the meaning of knowing.” He also writes books and says that he is currently halfway done with a book titled “Visatos vyksmo dėsnis” (The Law of the Universe). The creative student has also recently started writing a collection of dreams and fantasies, and a book dedicated to his daughter.

“Those are emotional letters and various teachings, which will remain to her as a piece of me when I’m gone”, he says.

The terrifying inability to comprehend the size of the world, the mystery of a moment and magic, the love for his daughter and people, all inspire him to create. Tomas says that he has people to look up to because his grandfather also painted and played the mandolin. His grandfather was a lecturer, and students learn from a textbook he has written – that is an encouraging example to Tomas. 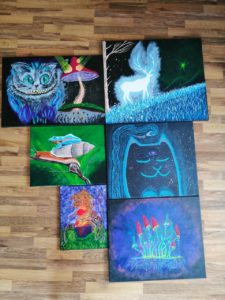 The Roman philosopher Seneca’s “Letters to Lucilius”, which Tomas had read in his teenage years, also influenced his way of creativity.

“This book made a great impression on my young brain, I was able to understand the meaning of creation, because you never know what times and people your works may reach, it is truly magic”, says Tomas.

When asked in what conditions he is able to create most successfully, he answers that sometimes it is enough to simply sit down and start doing something. However, in a creative process, it is very important how you feel. The student says that if you are not feeling well, there is no balance, and the signals of a polluted body overtake quality thoughts.

“I try to live a healthy life, I am interested in nutrition and I meditate every day”, he says.

Creating at a technological university

Tomas says that the choice of studies at KTU was prompted by interesting coincidences.

“I experienced a period of inner stagnation, so I started watching the environment and signs that were sent to me by life”, Tomas remembers.

Everywhere he went, he saw license plates with the combination of KTU letters, so he decided to read about what studies this university offers.

“When I learned that KTU offers the study programme of music technology, I immediately felt that this is my calling”, he says.

Tomas says that he is very happy with his choice because according to him, the studies are very interesting, the knowledge gained is invaluable, and the lecturers always incite curiosity.

“It seems that I hear music differently, in an even deeper and more meaningful manner”, Tomas happily says.

When asked how the student manages studies and creating at the same time, he answers that everything fits together very well.

“The studies helped me understand that I need to create even more because when I do not, I feel as if I’m robbing not only myself but others as well”, he admits.

Waiting for an exhibition of works

Tomas says that as a child he already understood that it is impossible for him to engage in only one activity: “When I remember my childhood, my day looked like this: in the morning, I wanted to be a professional football player, during the day – a scientist, and in the evening – a president”.

Tomas admits that sometimes he feels like jumping out of his body because his dreams start to suffocate him. For this reason, Tomas took interest in philosophy, psychology, religion, and esotericism. He says that this helped him answer the questions he had for himself: what story he wanted to tell about himself, what he could give to others.

“I realised that things done for the sake of others are the most meaningful”, smiles Tomas.

The passion for music came into his life during childhood. Music always encourages, in music Tomas discovers messages that sometimes help him when he is not sure how to proceed further.

Today, the community of KTU Faculty of Social Sciences, Arts and Humanities eagerly await the exhibition of Tomas’ works. When asked if he has ever organised an exhibition of his works before, he says that he has never done that before.

“I am genuinely happy with this opportunity because I gained a great deal of meaning and I am glad that everyone loves the painting I gifted, I poured lots of work and love into it”, Tomas says with a smile.