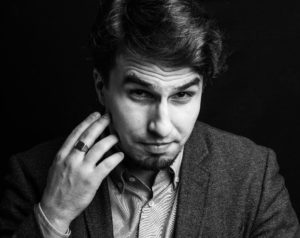 Creative Side of Technology: new exhibition in Kaunas centre
Important
Nerijus Čepulis: in today’s technological world creativity is becoming increasingly important
Important
Thomas Bryer: when I start with a goal, I never ask about the rules and procedures
Important
Gavin Stewart: You sell your skills, but language creates the first impression
Important
Antanas Jasenka: music, first and foremost, is science
Important
Women in Tech. Technology transfer project manager Odeta Brigaityte: It is important to not to compete but to complement each other
Important
Women in Tech. Aviation engineer Bengisu Yilmaz: I don’t compare myself with men, my goal is to be better than yesterday
Important
Women in Tech. Violeta Kauneliene: Women have contributed to the chemical sciences since the age of alchemy
Important
Women in Tech. Julija Kravčenko: engineering industry needs people. If somebody doesn’t like that you’re a woman, just email others
Important

Technologies have automated various fields – nowadays, many tasks cannot be imagined without the help of a computer of some kind. Unsurprisingly, these changes affect art and its creators. Both technology and art are characterised by a constant quest for innovations and extraordinary solutions, so dialogue between these fields is inevitable.

We are talking about this with a lecturer at the KTU Faculty of Social Sciences, Humanities and Arts, a political anthropologist Arvydas Grišinas. He argues that creativity has always gone hand in hand with technology. However, it is important to not only let technologies to advance but also to challenge them, to make them compete with us for more beautiful, more sustainably humanistic creations, as this would benefit all areas.

The academic community probably knows you better as a representative of political science. Could you tell us how did arts, curation of exhibitions and general contact with creative expressions come into your life?

My academic activities have always been interdisciplinary; I usually introduce myself as a political anthropologist. In the research of political processes, I apply visual analysis methods such as analysing political symbols, images, public spaces, aesthetics of protests. I have been teaching a course of Anthropology of Political Images at the Vilnius Academy of Arts for many years. Image determines many things not only in art but in public life as well.

Any political regimes, the military, health care institutions, the European Union, or the post-Soviet world – everything has a certain aesthetic. Even bureaucrats – they are often called “grey”. Jeffrey Alexander argues that this aesthetic holds a lot of information that organises, disciplines public and international life, and creates a humanly recognisable meaning. Therefore, art is not that far from politics – Hitler was also a failed artist before he became a dictator.

My path, thankfully, is a little different. Perhaps, because I never had very high artistic ambitions. When I was a child, I attended art school. I grew up in a family where the arts were valued. I always had a lot of artist friends, I always loved and understood visual language.

My career represents a typical road of an “addict”: I worked in a museum, a gallery, I started writing reviews of exhibitions; later I had to organise several exhibitions myself, eventually, I joined the interdisciplinary union of artists, and this autumn I joined Kūrybinės Jungtys Association uniting professionals of culture and arts… This is how I “fell” into the culture sector.

Art always seemed like a natural part of life to me, therefore, I never tried to separate it from other areas of life. I accepted art as an integral part of a full-fledged existence, so that is why it also occurred in my academic activities.

What type of art do you appreciate most?

Sculpture. I have liked Giacometti since childhood. Later I learned that he had “stolen” his aesthetics from old Etruscan sculptures. After that, I started to like him even more. From Lithuanians, I have great respect for the icons of our sculpture world: Šnaras, Šnipas, Navakas, Urbonavičius, Mazuras and others, who are already over sixty. Quite recently, I was fascinated by the exhibition of Leonas Strioga works, his sensitive and gentle painting was akin in precision to woodcutting…

From the younger generation, I am very impressed by Viržbickas and Sauka. I keep joking that I wish that Sauka would cast me a tombstone out of ferrocement. I love material art.

How would you describe inspiration? How does it occur to you and what inspires you? And, on the contrary, what do you find uninspiring?

I have heard Domantas Razauskas once say that inspiration comes through the nose. I don’t know, I have never tried it, or maybe there was no opportunity… When I was a child, I had problems with nasal polyps, and later I broke my nasal septum. For me, inspiration often strikes in the shower, and as a rule, I never have a notebook with me.

How do you think evolving technologies are changing creative expressions and creativity? How does it affect other fields?

I don’t like to think about technologies and the fact that they are evolving. For me, they accelerate, widen, spin, flicker, wave something, press buttons. In short, they try to be like us and our imaginations – only better. Because of that, it is important to prevent technologies from doing so. We have to compete with them: which of us will create more beautifully, which of us will be more human. This would bring benefits to all fields.

Is creativity inseparable from technology? Is it possible to be a successful creator, an artist without any knowledge in technologies and without the ability to manage various new tools?

It has always been difficult to isolate creativity from technology. You had to be able to extract the pigment of the paint, you had to know how to carve a sculpture, you could not dance beautifully if you did not know how to do it. According to Bernard Stiegler, a human being, in general, is a technological creature, every action they take is technological. To be honest, I don’t know if I agree with such a Prometheus human assessment.

However, the anthropologist Alfred Gell argues that there is a tight link between technology and sorcery, a certain ability to astonish, to amaze that carries great power. He names technological spells used by Polynesian tribes, with the help of which the masters decorated the boat oars that were used to paddle to visit neighbouring tribes. These tribes, captivated by the view, could be affected much easier, and they were more benevolent to the newcomers.

In this sense, technologies and arts seem to be related, and this magical power can be felt more and more in our political lives as well. Judging by such trends, our cultural sector is facing uncertain times as well…

Do you think that various technological tools will replace artists in the long run?

I really do not like guessing about the future. But I think that the nature of artificial intelligence and other technologies is functional. They exist for something. Meanwhile, I believe that artists exist because they just live that way. If some kind of drawing machine pushes artists out of the market, it will be the market’s problem and a very serious one. But in this sense, existential interests should not cross much.

If we look at it from a different perspective, do technology developers also need creativity? Why?

After the creation of the atomic bomb, it seemed that they could have had less of that creativity. But one can turn the question another way around: do modern technologies still need developers? After all, self-learning AI already exists. It would be interesting to imagine a robot, which is created as separate from human causality, whose sole function would be to roll like a dry tumbleweed across the green bright tomorrow’s fields, shining from radiation, with the sun setting in the background.

What are and could be the specifics of communication between technology and arts (creativity) and the people representing these fields?

In such situations, I would be much more interested in exploring the creative results of misunderstandings. Therefore, I would like to encourage the artists to speak as incomprehensibly as possible, and the technology specialists to doubt their understanding and knowledge as little as possible.