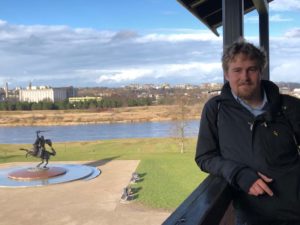 Kieran Spencer from the USA: family history encouraged to choose studies at KTU

Kieran Spencer, who grew up in a small town in the USA, chose studies in Lithuania because of his family history. The student, who is currently pursuing a master’s degree in Public Policy and Security at the Kaunas University of Technology Faculty of Social Sciences, Arts and Humanities, says that his great-grandparents were Lithuanian. “My family’s connection with Lithuania broke off a long time ago, but I decided that I want to explore the other side of my identity”, says Kieran.

“When I was travelling to Lithuania for the first time, I thought a lot about when was the last time a family member of mine was here, and I remembered that this person was my great-grandfather, who probably left by a horse-pulled cart”, says Kieran.

He remembers imagining his great-grandfather leaving Lithuania and not knowing what awaits him. The student says that he does not want to lose his American identity, but is planning to keep visiting Kaunas and maintaining a connection with Lithuania even after his studies.

When he first disembarked the plane in Vilnius airport, Kieran felt amazing.

From Jonava and Vilnius to New York 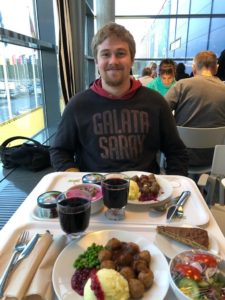 The student says that there are not many family history related facts and documents remaining. His great-grandmother came from Jonava district, and his great-grandfather lived and worked near Vilnius. Both of his great-grandparents left Lithuania for New York at the beginning of the 20th century. They met each other over there, fell in love and got married. Since then, no one from Kieran’s family has returned to Lithuania until last year’s January.

Before arriving here, Kieran has thought about the fact that Lithuania is not the same as it used to be during the time his great-grandparents lived there.

“While my family was in the States, Lithuania survived Soviet and Nazi occupations, the fall of the USSR, restored its independence, joined the EU, and became a modern country”, says Kieran.

During these years, his family’s lifestyle also changed. To survive, his great-grandparents had to work in factories, and now Kieran’s mother works as a medical doctor. She still remembers some Lithuanian words that her grandparents used, and has a photo of their wedding.

The student’s family also has letters with soviet stamps that his great-grandmother received from Lithuania, as well as an old Lithuanian Bible that she carried around with her everywhere. Kieran says that while they know some interesting facts and possess some items, a large part of history is still lost.

Graduated from his bachelor’s in Turkey 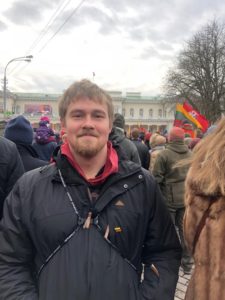 However, Lithuanian roots are not the only reason Kieran chose Lithuania and Kaunas University of Technology.

He was both surprised and happy when after a long search he found out that KTU was the only European university allowing student applications for spring semester during December. Public Policy and Security master’s study programme caught Kieran’s attention because it complemented his previous studies – he graduated from Istanbul Bilgi University with a degree in International Relations.

According to the student, his previous university was constantly pressured by Istanbul’s government to make changes to the study programme, and a couple of lecturers were even dismissed because of political reasons. However, according to Kieran, studying international relations as a foreigner in one of the few remaining liberal universities in Turkey was an invaluable experience.

Because of the pandemic, Kieran could not spend much time in Lithuania but says that Kaunas is a much quieter city than Istanbul. He is also glad that there is no massive political divide among KTU students: “Over here, I cannot imagine someone recording a lecture in an attempt to have a lecturer dismissed from their job for criticising the government as it happened in Turkey.”

He says that the only difficulty he experienced in Kaunas was the fact that students seemed to be less actively communicating between themselves; Kieran is a little bit upset that he still has not had a chance to get to know his fellow school mates at KTU better.

However, he fondly remembers his first visit to the KTU International Relations Office, where everyone was friendly and warm, and the KTU career consultants who have helped him with his internship.

For comparison, Kieran says that Turkish people are very social, and talk to others as if they were very close friends, even if they do not know each other. If they get angry, they express it without hesitation. Turkish are also willing to help both acquaintances and the people they do not know.

According to Kieran, many Lithuanians seem to be introverted.

“If they do not know the person, they often avoid them”, says Kieran.

However, he admits that once you get to know Lithuanians better, they are very kind, friendly, and honest people.

When asked about learning Lithuanian language, The student says that he knows how to introduce himself, ask everyday questions, and has enough knowledge to order something at a restaurant.

“My favourite word is “ačiū” (ENG thank you) because it sounds like a sneeze”, Kieran laughs. On a serious note, he truly wants to learn Lithuanian so that he could easily communicate with others and say that he is Lithuanian.

Future is connected to an international career

According to the Head of Study Programmes Eglė Vaidelytė, Kieran’s chosen studies together with BSc in Public Governance are for those who wish to attain competencies to understand, predict, and control problems of public policy, and to overcome any obstacles that may arise from crises of various areas.

“Many students from all over the world study here – from India, Spain, the USA, but they are all united by one common goal – to better understand the principles of public policy and to contribute to ensuring safety in different areas around the world. Our graduates see their careers in the national and international public sector and non-profit organisations”, says Eglė Vaidelytė.

Kieran Spencer himself has not yet decided, what career would he like to pursue in the future.

“For now, I only know that I would like to work in a multilateral diplomacy area, for example, at a European Union or United Nations organisation”, says the student.

Currently, he is working at Prague’s political research group at the Institute for Politics and Society. Kieran says that he analyses political documents and that he really enjoys this work. The student says that this way, he stays informed about various political events from all around the world.

Kieran is sure that he would like to work on an international level and do something that positively affects the world. He is glad that he chose to KTU for his studies and is eager to come back to Lithuania and experience as many exciting adventures as he can.

“In Lithuania, I am accepted as a person of Lithuanian descent, and to me, it is very important”, he says.

Admissions to Autumn 2021/2022 are now open. KTU offers 18 Bachelor’s and 24 Master’s in English in a variety of fields – from social sciences, humanities and arts to informatics.

Choose your studies and apply today.

A month ago
We are using cookies to provide statistics that help us give you the best experience of our site. You can find out more or switch them off if you prefer. However, by continuing to use the site without changing settings, you are agreeing to our use of cookies.
I agree