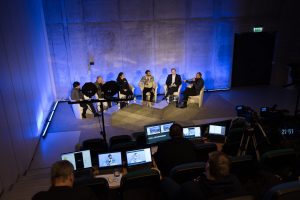 Forum “Higher education transformation: alliances as a strategic direction”: Lithuanian universities invite to a top-level discussion
ECIU
Diploma will not be the main aim for the Gen Alpha: they will doubt the set standards, pursue individuality and challenges
ECIU
During the ECIU University challenge, KTU students have developed an idea for oil recycling
ECIU
Experts say that virtual reality will address the shortcomings of distance learning
ECIU

The ever-changing job market and student needs for knowledge and innovation urge educational institutions to become more appealing and inclusive. Aiming to persist the competition on the international level, European educational institutions are joining forces in alliances and forming multidisciplinary research groups that can tackle complex and multifaceted challenges and bring groundbreaking innovations into the worldwide picture.

Initiated by Kaunas University of Technology (KTU) and organised together with Klaipėda University (KU), Vytautas Magnus University (VMU), VILNIUS TECH, and Vilnius University (VU) a forum “Higher education transformation: alliances as a strategic direction” brought representatives of the state and public institutions, visionaries of higher education and practitioners from European university alliances for a joint discussion on December 9.

An independent advisor on higher education strategy Peter van der Hijden, World Bank’s senior consultant of finance, competitiveness and innovation Dr Danica Ramljak, President of ECIU University Màrius Martínez, director of the YUFE alliance Dr Daniela Trani were among the distinguished speakers of the Forum. The participants also could listen to the speeches by the director of the European Quality Assurance Register Colin Tück, and the advisor to the minister of education, science, and sport Andrius Zalitis.

“It’s not enough to focus on creating knowledge on problems nowadays”, says Audronė Telešienė, a professor of sociology and communication. According to her, systemic thinking is now paramount. It allows challenges to be understood and addressed by considering the point of view of different disciplines.

Alliances are based on cooperation

The members of the discussion unanimously agreed that European university alliances are based on cooperation principles rather than competition. Gintautas Jakštas, the Vice-Minister of Education, Science and Sport, said that the smart specialization and certain priorities for individual fields of science with the help of alliances allow us to show our strengths and emphasize our uniqueness.

The Vice-Minister is assured that internationality in science is the base for new prospects and challenges. He stressed that local competition in various rating systems is not favourable to higher education in Lithuania. “We should compete internationally rather than locally”, the vice minister noted.

“We do great in some areas, but we should not expect to be the best in all possible areas”, Jakštas said. He says that collaborating in alliances could help Lithuanian science to be more visible in the international environment.

Another member of the discussion, professor Almantas Salamavičius, noted that such unions of educational institutions are developing a new science and education culture in Europe.

“We are now creating a space, a certain culture, where students, researchers and the whole academic community can get involved and cooperate. It would be a huge achievement”, the professor says.

Leadership is crucial for the development of future industries

“Invest Lithuania” general manager Elijus Čivilis notes that the society does not fully understand the importance and significance of digitalisation or Industry 4.0 for the labour market: “Although these tendencies are accustomed, we are not their developers or managers.”

Čivilis also points out that according to OECD, Lithuania is the second most vulnerable economy in the world in areas related to automation and robotics.

“I’m certain that these topics need more attention. We should take leadership and accountability instead of waiting for the world to transform us”, says the general manager of “Invest Lithuania”.

He also notes that a single institution cannot take the lead, as this issue requires the involvement of all stakeholders: “As investor representatives, our role is to focus on high added value. We focus on jobs that are in demand and will create the industry of the future. We wish for other institutions to be involved in this process as well.”

According to Čivilis, Lithuania does not invest enough in specialist training for fields that are the strategic priorities of the country. He is assured that university alliances could assist in multidisciplinary issues as well as in fostering talents and attracting investors.

“Our specialists have deep but narrow competencies, and here we see the gap compared to European specialists”, says the professor. According to her, university alliances create an international culture that empowers different people to work in teams and tackle complex obstacles.

Čivilis emphasized that the competitions nowadays are between continents rather than countries: “Gradually, everyone begins to realize that one by one they just couldn’t do it”. In comparison, he said that university alliances could also become a precedent to shift the direction of competition in the world.

Telešienė also noted that the market, its various sectors, and all citizens will shape the future of science. “Thinking about what science will look like in European university alliances and how to open it up to society is one of the most important challenges”, she said.

Klaudijus Melys, a Lithuanian youth representative at United Nations, also emphasized the aspect of social inclusion: “Europe’s uniqueness is that it involves as many people as possible who are willing and able to do something.”

According to him, universities cannot remain closed from the public but rather share their knowledge with society. Melys also stated that certain obstacles in Lithuanian education limit the involvement of university students in research and projects.

“Often, universities do not have a monitoring system to assess how many students are involved in research. There are various barriers to the involvement of potential young researchers in research projects. It is even difficult to apply for funding,” he revealed.

Melys also pointed out that interdisciplinary projects are especially relevant for the involvement of students. He said that it would create better conditions for future academics to conduct research but also potentially lead to closer cooperation between colleagues working in different scientific fields.

Professor Salamavičius stated that one should think of an alliance as an opportunity to improve the quality of education in Lithuania.

“This is a new platform where we can find beneficial things for ourselves. These could be new study programs, innovation, interdisciplinary working models. However, we could also propose our own ideas and share our experiences,” he said.

Ideas and initiatives generated at the Forum were presented and discussed in a strategic discussion with the government representatives on December 10.

Board meeting in Kaunas: setting strategic directions and opening of ECIU University space