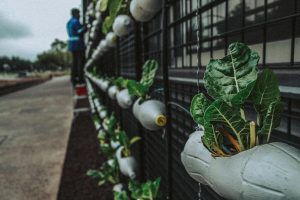 Lithuania, like other small open economies in Eastern Europe, is often characterized by linear production and consumption. Despite the European Union (EU) initiatives to prompt practical implementation of the principles of the circular economy, the problems of insufficient production from natural resources, relatively short product consumption term and small product reuse, limited waste recycling and new value creation from waste are still relevant.

In Lithuania, the most prominent example of the circular economy is the system of reverse vending machines. With reference to the data announced by the Ministry of Environment of the Republic of Lithuania for 2017, disposable beverage packaging is collected in nearly 3 thousand designated collection points; recycled packaging serves as raw material for the manufacturing of other products rather than become waste.

Nevertheless, KTU and Vilnius University (VU) scientists notice that the circular economy is not limited to sorting and recycling waste. Its principles can form the basis for business model innovations in Lithuania and bring immediate direct benefits to the end-users.

Circular material use in Lithuania is merely 4.5%

The circular economy has become a priority area of the development of the European Union due to the fact that it can lead to the whole EU (including Lithuania) increase its resource independence. The circular economy leans on hierarchical implementation of the 4R principles: reduce–reuse/remanufacture–recycle–recover.

“First of all, we need to reduce the consumption of primary raw materials and energy, to design eco-friendlier products, to try to reuse or to recycle at minimal costs a product already used, and only then recycle the existing waste”, explains Prof Dagilienė.

The key to putting the circular economy principles into practice is to immediately design a product (if it is possible with the consideration of technological factors) that it is less wasteful and energy-consuming.

According to Prof Dagilienė, both technological solutions and elimination of business barriers are important factors because both of them open new opportunities to the business.

Item range in reuse centres in Finland – from toys to kitchenware

Although some principles of the circular economy are applied in different industrial sectors, supermarket operations are most visible to the public. According to Viktorija Varaniūtė, the researcher at KTU School of Economics and Business, when analysing the drivers for the circular economy, the role of supermarkets should not be overlooked as they have a profound impact on people’s consumption habits.

“The Scandinavian countries are considered to be the best example of circular economy implementation. Estonia is the leading country among the Baltic States it is adapting much of the best Scandinavian practice. The retail sector in Lithuania generates the turnover that amounts to nearly 9 billion EUR per year; their assortment not only shapes consumer behaviour but also has a huge impact on the waste management system”, says Varaniūtė.

“Although second-hand shops are not a new idea, they reflect a growing environmental awareness and understanding of sustainable consumption”, says Prof Dagilienė.

What is more, building and development of more circular business models, according to the professor, can stimulate the growth of different economic sectors and contribute to the creation of new workplaces.

By sorting plastic, people can pay for transport and cinema

Previous studies show that the governments in small economies in Eastern Europe have very strong decision-making powers and responsibilities. Minding this fact, KTU researchers note that one of the ways to stimulate the business transition to a more circular economy is to promote cooperation between business, educational institutions, public authorities and their subordinates.

“For instance, Istanbul has a system where people can fill their ‘Istanbulkart’ cards with points received by sorting out plastic; these cards can be used to pay for public transport. Waste sorting is also remunerated by public transport services in Rome, Beijing and Surabaya (Indonesia). In Sydney, sorting out plastic is remunerated by granting film tickets”, Prof Jurgita Bruneckienė of KTU School of Economics and Business lists successful examples of a circular economy.

“It is important that business companies themselves contribute to such initiatives. For instance, in the UK, ‘Coca Cola’ encourages people to sort out plastic by providing a 50% discount on admission to various amusement and marine parks”, adds Bruneckienė.

An equally important role in the circular economy promotion, according to the professor, is played by educational and training institutions.

“The development of the circular economy is driven by the integration of economics and management modules into technical and natural sciences. I am not only talking about the perception of environmental and sustainable consumption acquired by students, but also about the perception developed by professionals and strategic leaders,” says Bruneckienė.

“Business companies themselves also have to switch into the circular business models, starting from a company’s vision, a strategic business plan, modification of production technologies and staff training, and ending with exploring new markets and business opportunities”, explains Bruneckienė.

As it was noted by Prof Dagilienė, the potential of systematic economic research into the impact of the circular economy and its conceivable macroeconomic benefits to the Lithuanian economy has hardly been exploited.

“Prior to practical implementation and the active use of public financial resources, it is important to have a thorough understanding of the transformation of the current economic system from linear to circular mode. For this reason, the project ‘Circular Economy Modelling and Empowerment Perspective in a Small Open Economy (CEMESOE)’, aimed at assessment of the macroeconomic effects of this process on a small open economy, is being implemented by KTU scientists in cooperation with VU researchers”, says Prof Dagilienė.

During the project, KTU and VU researchers, working with scientists from Germany, Italy, and the UK, will explore the impact of the transition from linear to a circular economy on the dynamics of the economy, public welfare and creation of new workplaces in Lithuanian cities, regions and the country as a whole.

“The concept of the circular economy can be especially appealing to a small open economy like Lithuania that relies on importing exhaustible commodities for its economic processes. Therefore, it can shape the demand for exhaustible resources by targeting larger longevity of products and so diminish its carbon footprint. Moreover, Lithuania is a very dynamic small open economy that can much easier implement large-scale changes to its economy than bigger, more established economies”, states Dr Patrick Grüning, a researcher at Vilnius University.

As it is noted in the introduction of the project, the research results will directly contribute to the definition of the functioning of the circular economy in a small open economy and the development of a dynamic stochastic general equilibrium (DSGE) model for a small open economy that will allow to assess the effects of the circular economy empowerment and submit the strategic proposals and solutions facilitating the transfer from linear to circular economy in Lithuanian business companies, cities and the country as a whole.