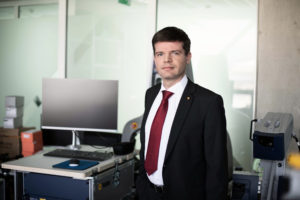 Application of low-intensity pulsed ultrasound in combination with microbubbles might enhance the delivery of chemotherapy medication used for treating cancers. In their study, a team of Lithuanian researchers from three universities – KTU, LSMU and VMU – claim that the rate of microbubble survival time is the best indicator for determining the efficiency of sonoporation, i.e. ultrasound-induced laceration of the cancer cell membrane.

Poor drug delivery into cancer cells is one of the greatest concerns in anticancer therapy. Insufficient drug concentration in the tumour limits medication’s therapeutic efficacy, therefore the researchers all over the world are looking for solutions that would enhance its transport into cancer cells. One of the methods that are getting increased attention recently is sonoporation caused by ultrasound.

There are two main mechanisms by which ultrasound may affect drug transport into cells. Firstly, under the effect of ultrasound, all fluid starts moving in oscillatory fashion and this may enhance the diffusion of the molecules through the cell membrane. Another mechanism includes usage of microbubbles to damage the structure of cells. The tiny (1–4 μm in diameter) gas-filled spheres coated with a shell made of lipids, polymers, and proteins are used to enhance the ultrasound imaging procedure. It has been observed that ultrasound causes microbubbles to rapidly expand and contract – this phenomenon is called cavitation. Cavitation causes the flow of the fluid around the microbubble, and the produced shear forces may create small pores in cell membranes.

“The method where ultrasound together with microbubbles is used to improve the anticancer medication delivery into cancer cells is widely researched. Although mainly research is conducted in a laboratory environment during in vitro studies, first clinical trials have already started. We believe that our research results will add to the development of global knowledge in this critical topic”, says professor Dr Renaldas Raišutis, Head of Numerical Simulation Laboratory of Ultrasound Research Institute at Kaunas University of Technology (KTU).

While researching the sonoporation for improving the efficiency of the anticancer medication, the multi-disciplinary team of researchers from three Lithuanian universities worked together – Lithuanian University of Health Sciences (LSMU), Vytautas Magnus University (VMU) and KTU. After numerous studies, in which the researchers analysed ultrasound penetration signals under different acoustic pressure and duration of exposure, they have improved the method of predicting the efficiency of sonoporation. The research conducted by Lithuanian scientists reveals that microbubble survival time is the universal estimate, which defines the optimal duration of exposure for sonoporation.

“Our main finding is that only time-dependent estimate, the rate of microbubble survival time is needed to predict the efficiency of sonoporation. Therefore, our metrics are more advanced than the currently used inertia cavitation control variable”, explains Prof Raišutis.

Moreover, while studying the anticancer medication doxorubicin delivery into spherical (3D) cancer cell culture (a model for conducting experiments, which is more closely able to mimic conditions in vivo), KTU researchers together with the team from LSMU have determined the ultimate combination of microbubbles and ultrasound, that would enhance the transport of the drug into the tumour tissue.

During the research, which took place over several years, the scientists from KTU, LSMU and VMU were solving numerous problems related to the development of the ultrasound technology needed for delivering anticancer medication, the determination of ultrasound parameters for exposure and analysing the ultrasound penetration signals. According to Prof Raišutis, all the partners have actively participated and contributed to the research according to their fields of expertise.

The interinstitutional project “Influence of Pulsed Ultrasound for Efficiency of Compound Penetration into Cancer Cell 2D and 3D Cultures” (SonoCellsPlus) was funded by KTU, LSMU and VMU science support funds. Several scientific articles were published on the basis of the research conducted. The most recent one can be found here.