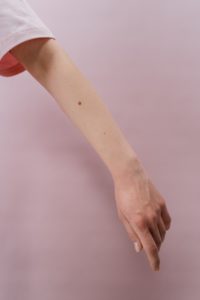 A team of researchers from Kaunas University of Technology and Lithuanian University of Health Sciences proposed a non-invasive method for detection of melanoma. A patented computer-aided diagnostic system developed by Lithuanian scientists proved to be more than 90% accurate in detecting malignancy in diagnostic images of skin lesions acquired from 100 patients.

In Europe, melanoma is the fifth most common type of cancer and is the major cause of death from skin cancer. Northern Europe displays the largest age-standardised rate mortality of 3.8 per 10,000 in the region, with an incidence of 23.4.

Excision of a primary tumour remains essential in diagnosing melanoma, and the decision for the operation is generally based on the dermatoscopic evaluation of the lesion. However, the accuracy of melanoma clinical diagnosis is only at 65% and strongly relies on the experience of the physician-dermatologist carrying out the analysis.

“The novelty of our method is that it combines diagnostic information obtained from different non-invasive imaging technologies such as optical spectrophotometry and ultrasound. Based on the results of our research, we can confirm that the developed automated system can complement the non-invasive diagnostic methods currently applied in the medical practice by efficiently differentiating melanoma from a melanocytic mole”, says Professor Renaldas Raišutis, head of the team behind the research at Kaunas University of Technology.

In the study, carried out by the researchers of two Lithuanian universities, diagnostic images of skin lesions acquired from 100 different patients were evaluated. By comparing and analysing complex data on skin tumours recorded by different techniques, the researchers were able to develop a novel diagnostic system, differentiating melanoma from a benign nevus with accuracy higher than 90%.

“An efficient diagnosis of an early-stage malignant skin tumour could save critical time: more patients could be examined and more of them could be saved”, says Prof Raišutis.

According to Prof Raišutis, the novel diagnostic system is firstly aimed at medical professionals; he estimates that the price of the final product might be affordable even for smaller medical institutions. However, the team is also thinking about the solutions for individual use at home.

The invention was patented in Lithuania (Patent No. LT6670B) and the patent applications filed for Patent Cooperation Treaty and the United States Patent and Trademark Office.

The above-described method and technology were developed within the framework of the project “SkinImageFusion: Complex Analysis Method of Spectrophotometric and Ultrasound Data for the Automatic Differential Diagnosis of Early Stage Malignant Skin Tumours”, funded by Lithuanian Research Council and carried out by a joint team of Kaunas University of Technology and Lithuanian University of Health Sciences (the latter headed by Professor Skaidra Valiukevičienė) in 2017–2020. Three doctoral dissertations were defended on the basis of this research.

The scientific publication “Diagnostics of Melanocytic Skin Tumours by a Combination of Ultrasonic, Dermatoscopic and Spectrophotometric Image Parameters” can be accessed here.