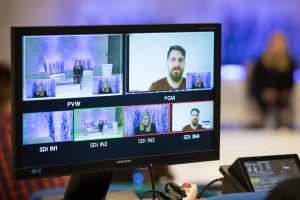 Gavin Stewart: good communication is the key to success
Community
QS Graduate Employability Rankings: KTU graduates are among the most successful in the world
Sustainability
Diploma will not be the main aim for the Gen Alpha: they will doubt the set standards, pursue individuality and challenges
ECIU
The largest in the Baltics career fair KTU WANTed Career Days will take place online
Important
World’s Largest Manufacturer of Crucial Automotive Components Is Coming to Kaunas
Important
Communications student Viktorija: studies at KTU opened doors for career opportunities in the Netherlands
ECIU

Here is a description of a statistical employee in Lithuania: it is a person working in a private business for at least 40 hours per week, whose job is related to trade, manufacturing, transport, and whose net salary per month exceeds EUR 900. If the said employee is a woman, her salary is 12% less, and she works in a public, educational, health care or social work sector. However believable the above-described portraits, how well are they representing the reality?

According to the human resources professionals, who are organising WANTed Career Days 2021, the largest career planning and contact event in Lithuania, individual careers and the job market, in general, are full of contrasts. Although they are not always visible in official statistics, these contrasts have a significant impact on the decisions of future employees and employers.

On October 27, professionals from dozens of Lithuanian and international companies will discuss and share their insights at the annual career fair WANTed Career Days 2021, which will be organised for the 17th time.

This year, for the second time the event will be held online. According to the organisers, despite the changed format of the event, its main goal remains the same – to facilitate contact between the young people, especially students, and the companies operating in Lithuania. During the event, the students learn about the peculiarities of the job market, work and internship opportunities, and the representatives of the companies can meet their future talents.

KTU WANTed Career Days 2021 will be broadcast online on lrt.lt and youtube.com. Altogether, the broadcast will last 14 hours. It will be synchronically translated into English.

Women’s role in the job market still defined by stereotypes

In the most general sense, contrast can be defined as a clear difference between the two phenomena being compared. In some cases, the contrast shows the spectrum between the upper and lower limits of the phenomenon in question, in other cases, it reveals the change that has taken place; sometimes, contrast reflects the existing stereotypes or even describes potential possibilities. Both job seekers and those who are looking for employees face contrasting situations in their careers and the job market. The differences are particularly significant in technology-related areas.

“For example, one the decreasing, but still existent contrasts are the different roles of genders in the job market”, says Kristina Skučienė, Head of the KTU Department of Student Affairs, which is responsible for career development.

According to her, schools, colleges, public organisations and businesses are increasingly emphasising the necessity of gender balance in the technology sector.

“Recently, Lithuania has been talking loudly and quite openly about the fact that girls’ interest in the field of STEAM is hindered not by their abilities or opportunities, but by stereotypes in the society and environment,” emphasizes Skučienė.

There is a lack of information on different careers

Rimantė Sedziniauskienė, who is responsible for the development of cooperation with business at the university, points out the other challenging aspects in technology-related business sectors. One of the most important is the lack of talent, particularly in the information technology, electronics and financial sectors.

“One of the most striking contrasting situations that I constantly hear about from the business representatives is the declining appeal of those careers that are essential for the market and economy among young people. For example, with the successful expansion of international companies and the arrival of new investors in Lithuania, the demand for qualified electronics engineers is constantly growing. This is especially evident in Kaunas. Meanwhile, the interest of young people in this field is growing too slowly,” says Sedziniauskienė, the Head of KTU’s Partnership Development Office, while pointing out the contrast between the number of vacancies and potential candidates.

According to her, this is due to many different reasons, but one of the most common is the lack of information about possible career prospects in various fields.

According to Sedziniauskienė, another tendency that has recently become more prevalent and identified by business representatives: young people who are very skilled in the technology field, often lack social and emotional competencies in comparison to the representatives of other fields.

“This became very obvious during the pandemic when work moved from offices to homes. Technically, it is no longer enough just to perform job functions, communication between the team, understanding and empathy for each other’s situation is of equal importance”, she says.

Skučienė adds that the beliefs related to work in the private and public sectors are also full of contradictions, which may influence a potential employee decision of work choice.

In her opinion, such a general black-and-white impression is detrimental when a specific career opportunity is denied even without delving into the real situation of the organization: “It is a mistake to generalise a concrete situation, to be guided only by opinion and not even to try to look for specific answers.”

Both specialists emphasize that positive contrasts can be observed in the job market, reflecting the changing behaviour of employers and prospective employees.

Sedziniauskienė says that during the last few years, the change in the mindset of the engineering business has been very obvious – the understanding that short courses are not enough to acquire a qualification has been reached.

“In the past, there have been opinions that there is no need for extensive studies and knowledge. It has been said that let studies in higher education last as short as possible, let young people enter the job market as soon as possible, and in the job, they will learn everything. However, companies have recently been hearing more and more about the need to develop the ability to lifelong learning. In the times, when the available knowledge ages so quickly, even the field professionals need to constantly update it, especially when we talk about technologies”, says Sedziniauskienė.

The organisers of the WANTed Career Days 2021 are also excited about the growing involvement of companies in the initiatives that bring together young people who are just starting their careers and seasoned professionals from various sectors. The times when students were of little interest to employers are in the past. Businesses are increasingly promoting early career development or the smooth integration of young people into the job market.

“We are extremely pleased that the event, which is being organised virtually for the second year, has received special interest this time, we have reached the maximum of the participating companies even before the registration deadline”, says Sedziniauskienė.

Education, business and industry work for the same goal

The participants will be able to get acquainted with a total of 58 companies, which will be presenting themselves across three sectors: digital and inclusive society and economy; advanced production processes, materials and technologies, and smart and sustainable cities, environment and transport.

“This year’s decision to position companies by sectors is influenced by our wish to demonstrate more clearly that each company is a component of a larger ecosystem, which aims to create added value not only for itself but also for the environment around us,” explains Sedziniauskienė.

According to her, the decision aims to reveal the possibilities of each career and show that, depending on the area of interest, everyone has more than one choice to use the acquired knowledge to pave their career path.

“Universities develop personalities and professionals, and companies should cultivate them. Of course, this is not an easy mission, but it’s worth doing this – only in this way we will achieve our state’s well-being”, says Skučienė.