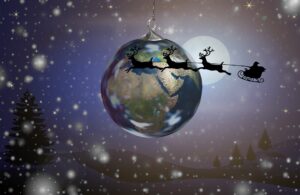 Food engineer Nóra from Hungary on her studies at KTU: It’s a hands-on experience
Important
Food engineer Nóra from Hungary: we are what we eat
Important
Are you from Europe? Don’t miss your chance to study at KTU for free
Important
KTU student from Colombia: even in the same country people have cultural differences
University
Alejandra from Nicaragua: in Kaunas, I have the freedom to walk anywhere I like
Important
KTU student from Spain: I trust the Lithuanian project
Important
Alexandra from Colombia: Lithuania is a very safe country
Important
Fallon from Zimbabwe: When I become a president…
Important

The closest family members around the table, festive treats, a twinkling Christmas tree decorated with garlands and shining toys, Christmas tunes playing in the background – this is probably what Christmas looks like in most parts of the world. Many will agree that the true meaning of Christmas is to share joy and warmth with loved ones. However, different countries have different traditions for the festive period.

Young people from Honduras, South Africa, and Hungary studying in the Kaunas University of Technology tell about what the most awaited holidays of the year look like at home.

Giovanna Andino Villalta, a student of Kaunas University of Technology (KTU) from Honduras, Central America says that back home, Christmas traditions are related to delicious food and, of course, spending time with loved ones.

“I come from a large family: my mother has seven brothers and sisters; my father has four. Each year in December, each sibling holds a Christmas gathering called a Posada. During the gathering, the host family cooks delicious food and offers games and entertainment. Also, a few weeks before Christmas is Tamaleada, when the whole family gathers to make nacatamales, a dish of steamed dough stuffed with vegetables and meat that is wrapped in a plantain leaf. Preparing and assembling the ingredients of a dish takes up to 3 hours, and cooking takes up to 8 hours,” says Giovanna, who studies mechatronics at the KTU Faculty of Mechanical Engineering and Design.

Another special Honduran tradition is Los Nacimientos, which is based on the Christmas story, i.e. the birth of Jesus Christ and the Catholic story of the Bible. People make clay figurines and place them in their homes to remember the birth of the baby Jesus; they also create entire cities with these figures, drawing inspiration from their hometowns.

“In Honduras, the festive period lasts the whole month of December. We celebrate Christmas on December 24 and 25. After returning home on December 24, we dress up, and around 7 p.m. the whole family gathers: we wait for midnight together – at that time we explode fireworks, hug, open Christmas presents, and at 1 a.m. we start with a gala dinner,” Giovanna shares her traditions.

On December 25, Hondurans gather again and eat leftovers together. According to Giovanna, both in Lithuania and in Honduras, the most important thing during the holidays is to share the joy with others, especially those who are in dire need of help. Therefore, Hondurans collect donations: of clothes, blankets, and toys and take them to those who need them the most, because the country has a high level of poverty.

This year, the KTU student will celebrate Christmas in Lithuania for the first time: “I can’t wait to experience how everything happens here. I can single out one similarity already – that is, pork dishes. Lithuanians cook many delicious dishes from this meat, just like Hondurans, who prepare pork dishes very often during the holidays.”

There is no Santa Claus in Hungary

Even though Hungary is very close to Lithuania, the holiday traditions here are a bit different than in our country. In Hungary, the Christmas tree is decorated only on December 24th, and small, beautifully wrapped chocolate-covered candies are hung on it, which children “steal” throughout the festive period.

“The most important festive dinner is Christmas Eve when we eat at least one fish dish and a dessert with poppy seeds or walnuts – it is believed to bring future wealth. Other popular dishes are stuffed cabbage, chicken, or duck. Among the desserts made, there are beijgli (roll with walnut, poppy, or chestnut filling), chestnut puree with whipped cream, gingerbread, zserbó (walnut and apricot jam layered cake), and others. The trend in desserts is obvious: they are often with walnuts, poppy seeds, and jams,” says KTU student Nóra Emilia Nagybákay from Hungary, a doctoral candidate in the Department of Food Science and Technology, Faculty of Chemical Technology, KTU.

She says that by the evening of December 24, all the presents slowly appear under the tree. Later, the lights are turned off, the whole family gathers, the Christmas tree lights are lit, and Christmas carols are sung together. The main difference from the Christmas traditions in other countries is that in Hungary gifts are not brought by Santa Claus, but by little Jesus, and they are not opened on Christmas morning, but on Christmas Eve.

“On the same evening, midnight mass is held in the churches. Around the churches is a nativity scene with the newborn Jesus and Mary, Joseph, angels, three kings, shepherds, an ox, a donkey, and a lamb. In some villages, groups of young people go from house to house and act out a nativity scene in exchange for food and drink,” says Nóra.

Although Santa Claus does not bring presents at Christmas, there is a similar tradition in Hungary: if children are well-behaved throughout the year, they clean their shoes and put them on the windowsill on the evening of December 5th. On December 6th in the morning, Mikulás (St. Nicholas) visits and fills them with sweets, oranges, and tangerines. However, those who were mischievous find a branch of a bush instead of sweets. Mikulás is depicted in the same way as Santa Claus – their appearance has blended over time.

“I was surprised that Lithuanians do not eat meat or other food of animal origin during Christmas dinner, except for fish, but the next day, during Christmas, they eat everything. Also, a tradition of placing straws under the tablecloth and having each member of the family pull a straw – the longer the straw is drawn, the longer life will be – is also unheard of. Hungarians, unlike Lithuanians, do not put plates and crockery on the table for dead family members,” says a Hungarian studying at KTU.

In South Africa, Christmas is at the height of summer

In the sunny Republic of South Africa, Christmas is in the middle of summer, so the temperature often reaches 30 degrees. Nevertheless, Christmas is as welcomed and celebrated here as in other parts of the world.

Francois Breedt from South Africa, who is studying mechatronics at KTU says that back home, as elsewhere else, family is the most important here during these holidays. Families meet a few days before Christmas and spend time together.

“Each person usually brings food or desserts to share with others. Everyone spends Christmas Eve by the tree; usually, the little elves (children) distribute gifts to everyone. After a festive evening with lots of food, families start the morning of December 25 with songs and stories about Christmas,” says Francois.

“The host family decorates the house, and most importantly – the Christmas tree. The rest of the family prepares different dishes and desserts before arriving. When everyone arrives, they put their gifts under the Christmas tree, trying to stay out of sight, so that the gifts are anonymous,” says Breedt.

In South Africa, many meat dishes are enjoyed during the holidays. Traditionally, men grill meat around the clock, while women prepare salads, make desserts, and bake different baked goods.

“There’s never a shortage of meat and pie,” Breedt says with a smile.