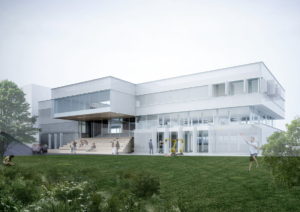 The landmark of sustainable architecture KTU M-Lab to be opened in 2022
Important
KTU dormitory renovation plan: 5 buildings in 5 years
Important
Interaction Between Science, Technologies and Art: Underlying Concept of the Emerging M-Lab at KTU
Important

At the end of the next year, the Kaunas University of Technology (KTU) M-Lab Prototyping Laboratory Centre will open its doors for researchers and students. To commemorate the official beginning of the construction, a capsule containing a letter to future generations was buried in the foundation of the building on Monday, June 28, 2021.

The Kaunas University of Technology (KTU) M-Lab Centre of Experimental and Prototyping Laboratories will be based on the principles of sustainable architecture – the existing infrastructure of the old campus building, which housed Kolegos cafeteria, will be replaced by a sustainable conversion. The M-Lab laboratory complex equipped with state-of-the-art research technology will accumulate the university’s scientific potential and help attract global talents.

“The M-Lab laboratory centre will contribute to the entire Kaunas innovation ecosystem not only with technology but also with architectural solutions. I hope that next year we will be able to invite everyone to the opening of the building”, said KTU Rector Eugenijus Valatka at the official event during which the capsule, containing the letter to future generations was buried in the M-Lab construction site.

The letter was signed by the representatives of the university community, the contractors Dzūkijos Statyba, Lithuanian Minister of Education, Science and Sport Jurgita Šiugždinienė and Kaunas City Mayor Visvaldas Matijošaitis.

In her speech, Jurgita Šiugždinienė emphasised the fact that laboratories, such as M-Lab, are natural hubs of innovation, which is born at the crossroad of different scientific fields.

“In these laboratories, not only experienced scientists, but also young researchers and students will meet. This laboratory will differ from the research environment that they have experienced: it will be mobile, transformative, they will be able to test, simulate and experiment with their creations”, said Šiugždinienė.

One of the future KTU M-Lab Laboratory Centre goals is to create modern experimental and prototyping laboratories. It is estimated that more than 5 million euros will be invested to reconstruct about 4 thousand square metres of research space.

The essence of the M-Lab architectural concept developed by Janulytė-Bernotienė Studio is green architecture, which focuses on actively including the urbanised public space of the student campus and the protected recreational greenery space in the recreational-public spaces of M-Lab. The innovative laboratory complex will comply with the latest sustainability concepts.

“With M-Lab, we aim to create the fertile work environment for researchers, which would inspire creativity and knowledge sharing. Moreover, we plan to make the spaces open for integration between business and science, allowing innovation development and research and development project implementation. The fields of physical and technological sciences with the highest potential are among our priorities”, says Lolita Jurkšienė, Head of KTU Performance Management Department, the leader of the KTU M-Lab project.

Opening in 2022, M-Lab will have 9 interdisciplinary research theme-focused experimental laboratories and 3 prototyping labs, responding to the needs of both society and industry. Remote healthcare management, industrial design, individual wellbeing and productivity-boosting in the workplace are among the topics that will be researched looking for solutions to the complex challenges of today’s world. The purpose of the building will be reflected in its architectural form – matt and transparent bioplastic will be used for the wall finishing, and the roofs will be fitted with plants. The outside terrace will open for recreation, discussions or events. All the workshops and laboratories in the building will be transformable and reconstructed according to needs.