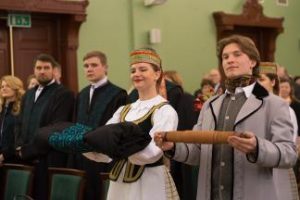 “This is a unique chance to hear one of the most distinguished people of the world, and possibly one-in-a-lifetime opportunity to communicate with him directly by asking questions and getting new knowledge here and now”, says Professor Rytis Krušinskas, the Chairman of the Senate at Kaunas University Technology (KTU). Next Friday, 13 October the Founder and Executive Chairman of the World Economic Forum Professor Schwab will be awarded the honorary doctorate of KTU; on the same day, he will also deliver a public lecture.

Professor Schwab, who holds doctorates in economics and engineering, has been researching and developing the concept of the fourth industrial revolution, has recently published a book The Fourth Industrial Revolution, which will be introduced during Year Economic Forum 2017 in Vilnius, 12 October.

According to Professor Rimantas Gatautis of KTU School of Economics and Business, this is one of the publications, which has power to set trends for researchers and decision-makers.

“This book is an inspiration for thinkers and scientists, its ideas can become foundation for research projects, concepts and more”, says Gatautis.

Honorary Doctor Is an Ambassador of the University

Professor Rytis Krušinskas says that Industry 4.0 and its progress in Lithuania is a much-discussed topic among the University’s academic society: “The University’s Senate has voted for the awarding the title of the Honorary Doctor of KTU for Professor Klaus Schwab, and we are grateful for cooperation for the Lithuanian Confederation of Industrialists, who have invited the globally renowned personality to Lithuania.”

According to Professor Krušinskas, it is a great honour to be able to call Professor Schwab as one of KTU’s Honorary Doctors; this fact adds to the University’s international visibility.

“Closer bond with such a distinguished personality, hopefully opens more possibilities for our country, such as the ways of introducing more information on Lithuania in the World Economic Forum, encouraging foreign investors, providing more new knowledge, based on current information”, says Krušinskas.

The Works Had an Impact on the World’s Politics

The Founder and the Executive Chairman of the World Economic Forum Klaus Schwab has once said that in today’s world the young do not learn from the old – they teach the old about the world instead.

The processes generated by the fourth industrial revolution, which have been analysed in the newest book by Professor Schwab, are connected to the challenges caused by the development of technologies – the digitalisation of companies, the radical changes of industry and business.

KTU Professor Gatautis says that Klaus Schwab is among the people who have paved the way for many advanced processes both in European Union and in other countries of the world.

“Professor Schwab’s research and projects have real impact on politics. The greatest states of the world implement strategic steps in economy; the political schedules are based on his findings”, says Gatautis.

He invites everyone to the open lecture by Professor Klaus Schwab at KTU: “If you are interested in economics, entrepreneurship, competitiveness (by the way, Klaus Schwab has coined the concept of competitiveness himself), the fourth industrial revolution, this lecture provides a perfect opportunity to get first-hand more extensive knowledge on these subjects”.

According to him, although in the academic world the word celebrity is rarely used, Professor Klaus Schwab is definitely one, and the chances to meet the person of this scope in Lithuania are limited.

Professor Klaus Schwab will be awarded the Regalia of Honorary Doctor of Kaunas University of Technology (KTU) on Friday, 13 October at 11am in the Grand Hall of KTU Cultural Centre (Laisvės Avenue 13, Kaunas). At 2–2.45pm in the same hall, Professor Schwab will read an open lecture “Leadership Challenges in the Age of the Fourth Industrial Revolution“.