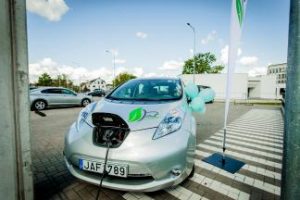 SmartChargeBox was officially introduced during Technorama’2016 – an annual exhibition and competition of young inventors organised by KTU’s National Innovation and Entrepreneurship Centre. The smart electric car charging station was created by Kęstutis Valinčius, Mindaugas Jančiukas and Edvinas Šinkevičius, young researchers at KTU’s Faculty of Informatics. According to them, society needs to look forward and electric vehicles are the future.

“I had been fascinated by electric cars for about three years, and two years ago I acquired my first electromobile. As am travelling about 60 kilometres to work every day, the need to charge my car emerged. I think, that about this time I got my colleagues interested into the idea of creating a smart charging station”, says Valinčius.

The ultimate purpose of the SmartChargeBox inventors is to promote electric vehicles by introducing smart charging stations across Lithuania, so as their users were confident that they would be able to charge their cars on long distance trips.

“There is only a few charging stations in Lithuania, which makes electric cars a very unpopular choice among drivers. Everyone, considering buying an electromobile is wondering, whether they will be able to charge the car during the trip to the seaside”, – says Jančiukas.

The smart charging station, created at KTU is collecting and analysing the data from users. The programmes which analyse the data collected inform about how often a charging station has been used, by what type of cars and so on. At the moment, the mobile app, which will allow to monitor the charging progress and to plan time, is also being tested. According to the SmartChargeBox creators, if charging of electric cars is paid in the future, the application will have this function as well. Also, the station will recognise the car and will offer the appropriate charge for it.

“For example, if you are travelling from Kaunas to Molėtai (approximately 150 kilometres one way), and your car is only halfway charged, you will be able to find the information on the nearest station and its features, such as availability and whether it is slow or fast-charging on the app”, explains Jančiukas.

Although the smart charging station is the first public station officially opened, its creators reveal that there are 5 charging points across Lithuania, which were used for research aiming to collect data and to improve the system.

Lithuanian market is only the first step. In collaboration with an international company KIC InnoEnergy, SmartChargeBox will be introduced across the Baltic States.