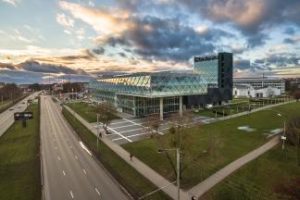 Earlier this week QS World University Emerging Europe and Central Asia (EECA) Rankings were announced. According to the Rankings, Kaunas University of Technology (KTU) is praised by the employers – in employer reputation criteria KTU has 91 points out of 100. Among Lithuanian universities, KTU stands out by the high qualifications of the academic staff.

The overall KTU position in QS World University EECA Rankings is 51 out of 251 in the region of Eastern and Central Europe and Central Asia.

“Indeed, we are pleased by the fact that KTU is highly ranked by the employers. Comparing KTU’s position among other Lithuanian universities we are among the best by the percentage of academic employees possessing doctoral degree and by the number of publications per academic unit”, says Lolita Jurkšienė, Head of KTU Strategy Monitoring and Processes Office.

In the EECA Rankings the Eastern and Central Europe and Central Asia universities are ranked on the basis of the data provided for QS World University Rankings. Although some of the ranking criteria are the same as in QS WUR, some of them, such as faculty staff with PhD, web impact and others are characteristic only to the EECA rankings.

This year KTU has improved its rank according to several EECA criteria, such as employer reputation, internationality and web impact.

In 2018 QS World University Rankings announced in June, KTU is ranked among 2.7 percent of the worlds’ best universities. By employer reputation KTU is ranked 334 globally, in four other categories the University is ranked 401+, and in two of them is among the first 400 in the world.