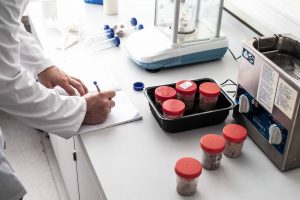 A team of researchers from Kaunas University of Technology (KTU), Lithuania and the University of Helsinki have proposed an extremely nutritious meat analogue using fermented okara (soy press cake). The innovation developed by the Lithuanian scientists can change the meat analogue industry offering a product that has less salt and saturated fats and more flavour than real meat.

Millions of people worldwide suffer from digestive disorders. In the US alone, digestive diseases affect over 60 million people yearly according to NIDDK. Experts say that the probiotics produced during fermentation can help restore the balance of friendly bacteria and, by enhancing the number of free amino acids as well as minimising the effect of anti-mitogenic substances, may alleviate some digestive problems.

Although fermented foods are rich in nutrients and fermentation can produce ingredients that improve smell and taste, the researchers from KTU Food Institute were among the few who relied on this process in meat analogue production.

“Meat analogues are the future food. Both business and science will have to reconsider the effect of using secondary raw materials, and it will benefit all the parties by reducing costs and saving resources. We believe that science is the key to an efficient shift,” says one of the authors of the study, Dr Alvija Šalaševičienė, the Director of KTU Food Institute.

The group of researchers from KTU and the University of Helsinki produced meat analogues by adding fermented okara, the by-product of soy milk production, to the plant-based matrices. Okara samples were fermented by applying probiotics L. plantarum P1 and L. acidophilus 308 strains. The products containing different amounts of fermented okara modelled under different conditions were then evaluated.

The study concluded that the use of fermentation makes okara a suitable component for meat analogues. According to the sensory and nutritional analysis, the optimum condition for producing meat analogues was the application of 6% okara in the matrices fermented by L. plantarum P1, when the matrices and okara are maturated at 4 °C for 2 hours.

“Meat industry has deep-rooted traditions and people possess a clear expectation how a pork or beef burger, chicken sausage or other meat product should look, smell, taste and feel like. That’s why when modelling a meat analogue, we need to clearly identify what we are developing and what qualities it should have,” explains Dr Šalaševičienė.

For example, during the project EIT FOOD RIS CEL 2021 (KAVA (no 19153-21060.)) it was determined that although Lithuanian senior consumers are willing to use meat analogues produced from plant origin material, however, the sensory properties of the products that are currently available in the market are still less appealing in comparison with meat.

According to researchers, there are many health-induced reasons for reducing meat consumption: it is hard to digest, the amounts of saturated fat raise “bad” cholesterol, also meat foods are usually over salted as fat reduces the flavour.

Meat analogues with fermented okara have more free amino acids, which diminish the antinutritional factors, therefore are more easily digested than meat. Besides, the meat analogues modelled at KTU laboratories contain less fat and saturated fat but the same amount of protein – about 14-18% depending on different recipe variations.

“Non-hydrogenated oils containing only small amounts of saturated fat were used while developing our products. Thanks to the small amount of fat we were able to create characteristic flavours by using only 1% of salt. Among the eleven ingredients used in our product are only natural spices, pigments and aromatic compounds, and no preservatives,” says Dr Gitana Alenčikienė, senior researcher at KTU Food Institute, a co-author of the study.

Currently, there are no commercialised meat analogue products with okara. However, the researchers are convinced that, as organic waste recycling is becoming more and more relevant in today’s world, their modelled meat analogue will find its way to the market.

Meat analogue with fermented okara is one of many products created by the researchers of KTU Food Institute. Recently, their pea-based meat analogue won the local innovation fair.

“Both meat analogues are nutritionally valuable: our product with fermented okara is more easily digested and the pea-based meat analogue is enriched with iron, which is very important for the normal functioning of the human organism. While creating our products we aim to solve at least one nutritional problem – be it calorie control, lack of fibre or iron, or sluggish digestion process”, explains Aelita Zabulionė, a researcher at the KTU Food Institute.

The meat analogues modelled at KTU laboratories contain less fat and saturated fat but the same amount of protein – about 14-18% depending on different recipe variations.

The researchers emphasise – every new plant-based product widens the choice for consumers and can reduce the usage of processed meat products. Meat analogues enriched with fibre, microelements, vitamins, amino acids, processed to remove antinutrients from raw materials are, according to them, the future food. Reusing different organic waste such as okara for food production could be one of the most important challenges to solve.

Reference: The above-described study was developed by Kaunas University of Technology and University of Helsinki researchers. The scientific publication “Impact of fermentation of okara on physicochemical, techno-functional, and sensory properties of meat analogues” can be accessed here.