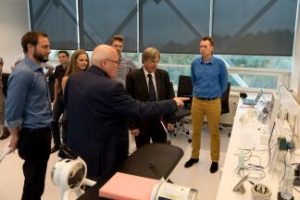 NASA Representatives Are Taking Interest in Research at KTU

In the beginning of this month Gary L. Martin, Director of Partnership Directorate at NASA Ames Research Centre visited Kaunas University of Technology (KTU). The new nanosatellite navigation system, which is being created at KTU, and internship possibilities for students and researchers were among the focuses of the discussion during the meeting.

The NASA representatives visited state-of-the-art Santaka Valley’s research facilities and were introduced to the latest achievements of the University’s research.

“I got acquainted with KTU researchers’ current projects and we discussed the possibilities of our cooperation in the future. NASA is looking for new technologies and innovations, and we also would like to encourage student exchange”, said Martin.

Andrius Vilkauskas, the Dean of the Faculty of Mechanical Engineering and Design said that this meeting was an extension of an existing long-time cooperation with NASA.

“We are looking forward to finding a funding solution for our students’ and researchers’ internships. Also, we were especially glad to be able to demonstrate progress on our new nano-satellite positioning technology, which is unique in the world”, said Vilkauskas.

During the meeting the possibilities of testing the new nano-satellite drive at NASA laboratories were discussed. This could be directly linked with the KTU researchers’ and students’ internships at NASA.

According to Martin, nano-satellites are among the research priorities at NASA, and KTU’s scientists and students, who have created the first Lithuanian satellite LitSat-1, can be valuable partners in this field.

“Nano-satellites do not need much energy or communication technologies, they are mobile and lightweight. The piezo mechanic positioning systems and their application in satellites was among the topics we discussed with KTU’s researchers”, said Martin.

According to him, space industry is not only for major companies. For example, in Silicon Valley there are several start-ups who are creating products aimed at this industry. In the future, Martin says, data gathered from space will be used even more extensively than it is now – for information on agriculture or traffic, for gathering various business-related data.

“The market is huge, and small satellites have great future in space industry”, said Gary L. Martin, Director of Partnership Directorate at NASA Ames Research Centre during his visit at KTU.