Lithuanian scientists: alkali-activated concrete from industrial waste is as strong as traditional and more environmentally friendly

Scientists of Kaunas University of Technology (KTU), Lithuania are developing methods for producing concrete without cement, using industrial waste – fly ash. The final product is as strong as the traditional concrete, is more resilient to damaging effects of acid, and more stable in cases of expose to extreme heat and cold.

In order to produce 1 metric ton of Portland cement, a basic ingredient of concrete and most commonly used type of cement around the world, up to 1 ton of carbon dioxide (CO2) is released. It is estimated that the global cement industry is responsible for 7 percent of yearly carbon dioxide emissions into the atmosphere. Aiming to reduce the negative concrete industry’s impact on the environment, KTU researchers have been investigating methods of substituting Portland cement with other materials.

“At first, the idea that concrete can be produced without using cement seemed radical. Now, after several years of intensive work we succeeded to develop alkali activated concrete, which compressive strength is 55 MPa (the same as in usual concrete). Instead of Portland cement we are using alkali activated industrial waste products – fly ash, biofuel bottom ash, AlF3 production waste – silicagel etc.”, says Vytautas Bocullo, researcher at KTU Faculty of Civil Engineering and Architecture.

According to the researcher, the biggest advantage of this type of binder is that in its production great amount of industrial waste, containing active form of silicon and aluminium compounds can be used. Theoretically, any material containing silicon and aluminium compounds could be used, such as blast furnace slag or metakaolin, material derived from modification of clay mineral kaolitine.

Treated with special alkaline solution these materials start melting and binding similarly to traditional cement. Depending on the composition, the final product can be either geopolymer or alkali-activated material. Alkali activated concrete is much more resilient to the effects of fire and acid. Also, due to its higher pH this concrete is protecting armature against corrosion.

Bocullo maintains that alkali activated concrete can be used instead of traditional concrete in many fields, and is becoming a globally popular alternative to traditional concrete. By properly preparing raw materials and the activating solution, such concrete is solidifying in usual (+200) temperature. However, in order to cost-efficiently produce this type of concrete, it is recommended to use local materials.

“We are trying to use waste materials from local industry, such as aluminium fluoride production waste – silica gel and biofuel ash. The preparation of the substance depends on the material itself. For example, fly ash of coal can be used instantly, but the biofuel ash need to be grinded up to the fineness of the cement. In order to improve the qualities of the final product, several substances can be mixed, but before that their chemical composition and additives need to be investigated for their impact on the environment and on the compressive strength of the concrete”, says Bocullo.

The research groups working in the KTU Faculty of Civil Engineering and Architecture are also experimenting and developing other types of concrete mixtures, such as ultra-high performance concrete, which is being used for safe production, self-renewing concrete and others. 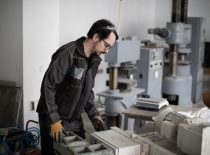 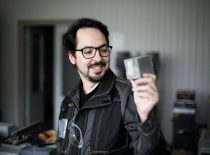 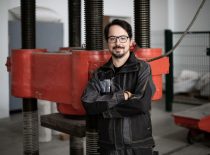