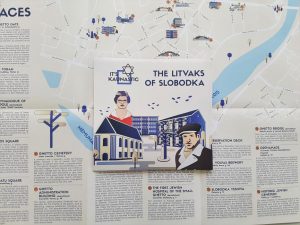 Kaunastic team has added the new edition to their beautiful maps collection and is inviting you to explore the historical Jewish quarter Slobodka. Grab a map in Kaunas Tourism Office or download it here, dress warmly and cross the yellow bridge from the old town to Vilijampolė.

“For centuries Kaunas was city of different nationalities and religions; it has become exceptionally Lithuanian only in soviet times. Holocaust and emigration has caused the disappearance of the entire world, which was existing in our city. The memory of the city disappeared together with its people. We know almost nothing about those who lived there, we don’t know what they were dreaming about, what they wished for. It is our duty to remember these people and their lives”, says Daiva Citvarienė, curator of the Memory Office of Kaunas European Capital of Culture 2022 Project.

The Litvaks of Slobodka is a map mixing different chapters and layers of the history of Kaunas. The route was prepared together with Asia Gutermanaitė, a Kaunas-based Litvak (the name for Lithuanian Jews) cultural heritage scholar and guide.

A lot of the objects on the route are or were located in the territory of Kaunas Ghetto, which was established in Vilijampolė on 15 August 1941, and turned into a concentration camp in Autumn 1943. It was burned in July 1944. Kaunas ghetto was one of the longest-running ghettos in Lithuania. It was also probably one of the most photographed one in Europe.

As the name suggests, the route also presents essential people that were either born in Slobodka or were imprisoned in the Kaunas Ghetto.

Sustainability expert Dr Fritz Balkau: In order to deal with climate change we need to see the whole picture

A month ago
We are using cookies to provide statistics that help us give you the best experience of our site. You can find out more or switch them off if you prefer. However, by continuing to use the site without changing settings, you are agreeing to our use of cookies.
I agree