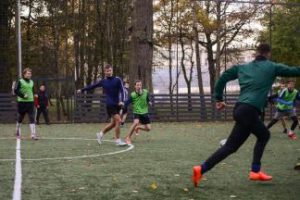 By joining Viesulas you will learn the variety of dance steps, will find out the news from the dance world, will improve your posture and coordination, and will learn secrets of natural elegance. The best dancers’ pairs have won numerous hobby class ballroom dancing competitions nationally and internationally.

KTU is one of two universities in Lithuania having a dancesport club.

KTU Judo and Sambo Team trains five times a week at the University martial art’s sports hall. Judo is a modern version of the ancient Japanese martial art of jujutsu. It is widely known for its spectacular throwing techniques and ground fighting. Judo training allows the members of the Team to develop their flexibility, reaction and fighting technique, which are often more important than physical strength.

The members of the Judo and Sambo Team are multiple champions of various student competitions, and different age groups championships.

KTU Football Team is looking for experienced football players. The current squad is building their team-work abilities and physical endurance towards the big events of the season. Football training not only strengthens your muscles, but also boosts energy levels and general wellbeing. The Football Team participates in all championships and tournaments, and the games organised by Lithuanian Student Football League. The KTU Football Team is a multiple winner of those tournaments.

KTU Weightlifting Team trains at the University fitness sports hall by lighting special weights designed to train at different levels three times a week. By improving their weightlifting techniques, the Team members also boost physical strength and muscle tone. The team members take part in individual, team and individual-team competitions, of which they are multiple winners.

The members of KTU Powerlifting Team are building their abilities to excel in three types of lift in a set sequence: squat, bench press, and deadlift. The winner in the powerlifting competition is decided depending on Wilks score. KTU powerlifting team is participating in national championships, student sports games; they are multiple winners of various Lithuanian tournaments and competitions.

KTU Mountaineering Team using the special gear and techniques are training at the Faculty of Architecture and Civil Engineering sports hall and in the Oak Grove Park in Kaunas’ centre. The team participates in Lithuanian mountaineering championships annually.

Meeting three times a week the Team members not only train to overcome the fair of heights, but are also strengthening their communicational and team-working skills. Once a year, in spring or summer, the KTU mountaineers travel to different locations to rock or ice climb.

The everyday training with KTU Basketball Team allows its members to improve their individual physical abilities and to test them at high-level competitions. By playing basketball one can develop their strengths and technique, can learn tactics and strategy of a successful player.

Playing basketball adds to personal development, teaches honesty and responsibility, encourages discipline and determination and boosts self-confidence. KTU Basketball Team is representing the University in the highest Lithuanian student basketball league and in a national league.

The accomplishments of the team: 1st and 2nd place in a Regional Basketball League, and 2nd and 3rd place in open international student sports championship.

KTU women basketball team players train four times a week, to develop not only their basketball playing skills and abilities, but to also improve their physical shape, to learn team working and leadership skills, and to pursue their personal development. The Team represents KTU at the Europe and world university championships.

The KTU Handball Team trains three times a week at the Faculty of Chemical Technology sports hall to strengthen their tactical and strategic knowledge of the game, develop their physical abilities and techniques. The current squad is inviting new members who have some handball playing experience.

Athletics, also known as track and field or track and field athletics, is a collection of sports events that involve running, throwing, and jumping. The KTU Athletics Team train five times a week, building their endurance and flexibility, aiming to become faster and stronger, to meet the standards of the Team – the winners of Winter Student Championship, Kaunas City Marathon and Baltic States Student Games.

The KTU Orienteering Team trains in open air recreational zones, such as Panemunė Forest or Oak Grove Park three times a week to strengthen their abilities to participate in orienteering tournaments, which take place outside the city, in woods and regional parks. While joining the Orienteering Team one will not only expand their knowledge on reading terrain maps and develop their orientation skills, but also find new friends, boost their immunity and physical endurance.

KTU Men Volleyball Team represents the University in the Student Volleyball League, Volleyball Federation Tournaments; they are multiple champions and prize winners in various games and tournaments. The current squad is inviting experienced volleyball players to join in.

Twice a week the KTU Women Volleyball Team gathers to train their physical endurance, physical strength and muscle tone. Team-working and collaboration abilities, readiness to take responsibility are the additional benefits of engaging in this sport. The KTU Volleyball players are the champions, vice-champions and prize winners of various national competitions and tournaments.

Training five times a week in the hangar sports hall the members of the University Table Tennis Team improve their playing technique, train their observational skills, coordination, concentration and improve their reaction. The Team participates in the student table tennis championship annually. The current team are looking for experienced table tennis players, who have participated in tournaments and championships to join them.

Improvement of tactical and strategic abilities, physical strength and reaction are among the key skills and abilities that KTU Tennis Team players are benefiting from while training four times a week at the KTU hangar sports hall. The Team annually participates in Lithuanian student tennis championships, and is encouraging experienced players to join in.

The KTU Aerobic Gymnastics Team train three times a week to boost their endurance, physical strength, flexibility, coordination. This sport is extremely suited for those willing to improve their physical wellbeing, posture, plasticity. The Team is representing the University in international, national and student contests. The current squad is inviting the students who have the basics of this sports to join the team.

Among the individual sports classes lead by experienced coaches are: table tennis, tennis, badminton, rock-climbing, northern walking, body design fitness, track and field athletics and dance. All the classes are free of charge and are taking place at KTU sports facilities.

All students and staff can join the team sports clubs, which are being coached by professionals and are taking place at the University’s sports facilities throughout the week. The team sports available are: basketball, football, volleyball, beach volleyball, cricket, rugby and handball.