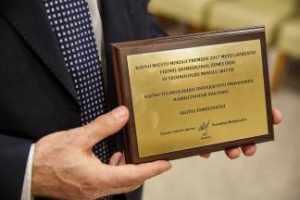 Professor Sigitas Tamulevičius, Head of Materials Science Institute at Kaunas University of Technology (KTU) was bestowed Kaunas City Award for Science. The Award is being given for the highest achievements in science and innovative ideas and their implementation in Kaunas city.

Kaunas City Science Awards have been organised since 2013. Professor Tamulevičius was awarded for his achievements in the category of natural, biomedical, agricultural and technological sciences.

“Physics is an interesting and universal science. If a person is curious and creative, this field is the perfect place for personal evolution. I have always been curious. Possibly that’s why I became physicist”, says KTU professor.

For Professor Tamulevičius this year has been marked by achievements – the newest article, which he wrote together with colleagues “Diamond like carbon nanocomposites with embedded metallic nanoparticles” was published in Reports on Progress in Physics, one of the top five science journals in physics.

According to Sigitas Tamulevičius, the most important qualities for every scientist are curiosity, continuous search for new ideas and achievements in adjacent fields, and complete devotion to one’s work.

“You have to live in what you do, to seek perfection and to learn all the time. If I needed to choose my career again, I wouldn’t change a thing. I think I chose right”, says Professor Tamulevičius.

The Kaunas City Science Award is 3 thousand euros. Since 2015, there are two awards bestowed annually – one for the achievements in natural, biomedical, agricultural or technological sciences, and the other – for social sciences and humanities. Since 2013, six scientists have been awarded. This year, Kaunas City Science Award has also been bestowed to art historian Rasutė Žukienė from Kaunas Vytautas Magnus University.