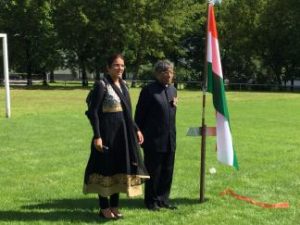 Early morning on the 15th of August, few dozens of Indians, studying at Kaunas University of Technology (KTU), were brought together by Wing Commander (Retd) Rajinder Chaudhary, VSM, Honorary Consul of India to Lithuania. The date is not only a national holiday in Lithuania, but also the Independence Day of India. This year the Independent India celebrated its 70th anniversary.

Addressing the gathering, the Honorary Consul congratulated the students and all the guests on this historic occasion and conveyed the greetings and the good wishes of HE Ambassador Ajay Bisaria.

Wg. Cdr. Rajinder Chaudhary addressed the students, who attended the celebration and encouraged them to come back to their home country and to reach for the highest goals. He said the students were the best example of India’s unity in diversity and called them goodwill ambassadors of India: they hail from different States of India, but live in harmony in a foreign country.

“India is becoming an economic superpower and after getting good degrees from the Lithuanian universities, they should think of giving something back to their mother country as sky is now the limit for the young entrepreneurs there too”, said the Honorary Consul of India.

Independence Day is a day when people in India remember the State’s road towards the independence and pay homage to their leaders and those who fought for India’s freedom in the past – from the youngest to the oldest. In 70 years India has made a tremendous progress to earn its rightful place among the prominent nations of the world.

“We salute those who laid their life in their struggles to free India from the colonial powers who had ruled over two centuries and rejoice on this day by saying Jai Hind”, explains Apurva Upadhyay, an undergraduate student of mechanical engineering at KTU.

Apurva Upadhyay and Vishal Amarbhai Raheja, Master’s students of mechatronics, who gathered Indians in Kaunas, say that India is always in their hearts.

“We need to carry forward the feeling of responsibility to upcoming generation, that we should never forget the efforts of our fighters for independence. It is our duty to keep the sovereignty of the nation forever”, said Upadhyay.

KTU acknowledges the assistance and support of the Honorary Consul Rahinder Chaudhary and H.E. Ambassador Ajay Bisaria to Poland and Lithuania for steady support to Kaunas University of Technology international students.

More than 700 students from different countries around the globe study at KTU. The University, even though aims to integrate international citizens into the KTU’s academic and social life, cherish the diversity of students and encourages them to celebrate their national holidays, to keep their culture and to sustain traditions.