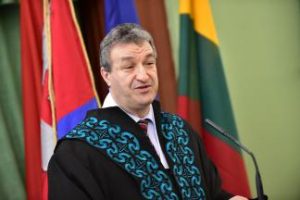 Hamid Aït Abderrahim has been working with Kaunas University of Technology (KTU) scientists for over a decade in order to develop a prototype of a new modern reactor which would help to reduce the duration of nuclear waste toxicity from 300 000 to 300 years. The hard work to find a solution for a global problem has finally paid off. “Today, thanks to our collaboration with KTU scientists, we can say that we have a solution to address a key safety hurdle for this technology”, says H. Aït Abderrahim.

Hamid Aït Abderrahim is a world-class scientist, who is fluent in 6 languages. Originally from Algeria, professor now lives in Belgium where he is the Deputy Director General of the Belgian nuclear research centre SCK•CEN. He is also professor of reactor physics and nuclear engineering at the Université Catholique de Louvain (UCL).

Hamid Aït Abderrahim has recently become the 44th honorary doctor of Kaunas University of technology (KTU). The honorary degree was granted to H. Aït Abderrahim for productive partnership with KTU in the ultrasound and nuclear research areas as well as important contribution to a new field of science – ultrasound diagnostics and visualisation in extreme conditions – development at KTU.

Is this your first honorary degree?

Yes, this is my first honorary degree that KTU has awarded me with. I am very honoured and proud of it. There is one saying in Lithuanian which I really appreciate – “Kas skaito, rašo – duonos neprašo” (Eng. “he, who reads and writes, won’t ever ask for bread”) – that puts knowledge and education at such a high level in your society. Therefore, being honoured by a Lithuanian university truly means a lot.

To me, this honorary degree is about strengthening the existing collaboration with KTU. Together with the colleagues from Prof Kazimieras Baršauskas Ultrasound Research Institute we have been working for more than 15 years, since 2001.

Also, being a doctor honoris causa means that you are an ambassador of the university. I will try to convey its ideas, values and openness towards the world while being the ambassador of KTU.

Since 1998 you are the director of the cooperation project MYRRHA between the Belgian Nuclear Research Centre (SCK•CEN) and KTU’s Ultrasound Research Institute. What does this project try to achieve?

MYRRHA is 1.5 billion euro project. The aim of this project is to develop a prototype of a new modern reactor which would burn radioactive waste. The duration of radio-toxicity of today’s reactors spent fuel can, in fact, be reduced from 300 000 years to 300 years.

In order to do this so-called transmutation of the nuclear waste we need to work with fast neutrons. Therefore, as a coolant for the reactor, we are using heavy liquid metal Lead-Bismuth. Together with KTU we are carrying out the research in pursuance of creating an ultrasonic visualisation system that would allow obtaining the internal images of MYRRHA reactor as well ensuring its safe operation in the Lead-Bismuth environment and strong radiation.

What is the outcome of this project?

This research that we are doing together with KTU is essential from the safety operation point of view. Indeed, our coolant being opaque without ultrasonic visualisation it will be difficult to convince the safety authorities that we are mastering all situations. The scientists of Prof Kazimieras Baršauskas Ultrasound Research Institute are world-level specialists. Those who are interested in this field of science know these researchers very well.

Today, thanks to our collaboration with KTU scientists, we can finally say that we have a solution for this visualisation problem.

Why did you choose a career in reactor physics and nuclear engineering?

Almost everything related to nuclear power is regularly portrayed in the media as negative. In terms of science – it’s very interesting! I became both interested and fascinated with nuclear reactors from an early age, when I was just 16 years old.

The most attractive thing in this science to me is the concentration of energy. It’s fascinating how such a small quantity of uranium can produce an enormous amount of energy. For example, 4 grams of uranium is equivalent to 1 500 000 tons of carbon.

Science has always been my passion. I had a chance to develop my career in Belgium, at one of the best Nuclear Research centres. I am still working on various topics, but currently my main concern as a scientist and as a citizen of the world is nuclear waste.

Trying to find a solution to a problem relevant to the whole society is also an enormous motivation because you are trying to respond to a concern of the people from all over the world.

What are the main challenges in nuclear energy that mankind faces today?

In terms of time and urgency the first issue that we have to solve today is the nuclear waste. In present-day reactors we are producing high level radioactive waste. In the majority of countries there are no decisions made about what to do with them.

However, Sweden and Finland decided to store their nuclear waste deep under the ground, in a geological disposal without any a priori treatment. But the problem still remains – it takes approximately 300 000 years for radioactive waste to come back to the same level of the natural uranium ore toxicity. It is a solution that is feasible but from the humanitarian perspective it’s not the best option.

Can there be a better solution than this?

Yes, it can. The alternative is to separate part of the nuclear waste which can be then treated in the advanced fast spectrum nuclear systems in particular in the Accelerator Driven Systems (ADS) to reduce their toxic time period to 300 years.

If this topic of research is “on the table”, I think it is the duty of the scientists around the globe to make the solutions happen.

What are the other challenges that you have mentioned?

In today’s reactors we are only using 1 per cent of the fuel’s potential. If we begin to use Fast-neutron reactors, that would help to increase the amount of energy to 50 or even 100 times for the same quantity of uranium. This is the second challenge that nuclear technology has to address.

The third challenge today is more economical and financial. The big reactors that are being built today take a lot of time to get constructed. It takes 10 years between the decision to take action and the first kilowatt per hour they produce. During those ten years countries or companies are investing money but not generating revenue. So, from the financial and economical point of view and taking into consideration today’s modern financial models, it’s not a compatible system.

How much does it cost to build one reactor?

To build a reactor is very expensive; it costs between 3-5 billion euros, if not more. That’s why the better solution can be small modular reactors (SMRs), which is a more flexible, cost-effective energy alternative.

To my belief, these reactors have an advantage from economical and financial point of view, because they are easier to construct and manufacture. After generating revenue, the next unit can be built without further delay. SMRs are compatible with today’s way of doing and thinking.

Last but not least, the fact that these reactors have small units, enables distributed production of electricity with the renewable energy sources, such as wind, solar and geothermal energies.

Society needs electricity, no big risks and solutions which are manageable in a certain time frame and that are compatible with their life. Nuclear science has yet to come up with solutions that respond to these criteria.

Will the governments of various countries be willing to invest into solving these costly problems?

It’s not something that is unaffordable. Actually, the solutions regarding nuclear waste cost 20 per cent more compared with today’s way of dealing with these toxic materials. When there is a problem as such, one always needs to invest in research in order to get the answers. To take action, first you have to understand the problem.

What are your future plans with KTU?

The technology that we have developed still has possibilities to be enlarged. Alongside with my KTU colleagues we will work together to establish a European project, specifically for this ultrasonic visualization system. Our intention is to propose this joint project for the next call of Horizon 2020 next October, the biggest EU research and innovation programme.

I would also like to add that some countries are willing to promulgate the nuclear power plants. We are talking about long-term operation, which means prolongation of the nuclear reactors for 20-30 years. Some of the components are aging and they need innovative approach for inspecting their evolution. Ultrasonic approach can be a solution.

Together with KTU scientist from the Ultrasound Research Institute we will also try to test and do research on the concrete of the nuclear power plants’ biological shielding.

Maybe there is potential for cooperation in other fields of science?

Yes, another potential collaboration that we could develop with KTU is with the Institute of Mechatronics. The university where I teach has a research programme related to medicine, which embraces the mechatronic approach in repairing broken parts of the human body.

What makes a modern scientist?

A modern scientist today is someone who is able to work in international teams. For example, people of 34 different nationalities work together in the aforementioned MYRRHA project. In science you have to be open minded about other cultures.

To me the interesting thing in science, which I have experienced myself, is that you are never asked about your nationality. Scientists don’t care from which country you are, they care from which lab you are.

We should promote scientific activities early on: in primary or secondary schools, so children know that becoming a scientist is not too complicated – one simply has to develop curiosity. There is a certain amount of complexity in science but there’s also great fun, that’s why I feel like I haven’t worked a day in my life.