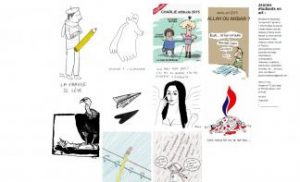 Is Shooting an Answer to a Stroke of Pen?

‘Our country, which fought over 200 years for freedom of thought and for freedom in general, was attacked for its main ideology’, says Kaunas University of Technology (KTU) student Jérémy Le Ny. Jérémy Le Ny and Adrien Diou-Hirtz, French students studying at KTU under Erasmus Exchange programme, share their thoughts on violent events in France.

‘The last 52 front pages of Charlie Hebdo were dedicated to French politicians (35 front pages), French extreme political party (10), Catholicism (2), Israel (2), Prophet Muhammad (1)’, says Adrien. The informatics student is shocked by the fact that the terrorists killed people whose actions were not targeted at them.

Master student of management, Jérémy says that he received huge support from fellow students. He thinks that the events in France are an outcome of a history of terrorism. ‘When a young person has no future, he follows anyone who offers him possibilities, even if it means carrying out such acts’, says KTU student.

What was your first reaction on the Paris events?, we asked Jérémy.

In the beginning medias reported the facts, sometimes mixing the information. Then it became clearer: Charlie Hebdo, a satirical newspaper, was attacked by two extremists who said they had avenged the Prophet Muhammad (Charlie Hebdo had received several death threats for having achieved the Muhammad caricatures). And from this moment I realised what happened. It was a pity, a shame. Our country, which fought over 200 years before for the freedom of thought and for the freedom in general, was attacked for its main ideology.

Why? Why did they attack this side which is important for us? A shot of AK-47 for a stroke of a pen. The fact that the victims have always fought for freedom of opinion and thought makes this crime even more appalling.

Through this terrorist action, it is the whole of France which is bruised because it is the French values that have been flouted.

How did your Lithuanian friends react? Did you get any support or questions?

My friends didn’t really ask me about the events, because I think medias already did it. However, I received a lot of support from my Lithuanian friends and from students from other countries. It was good to see that these events have not affected only the French, but the whole world.

There was a motto that came up during the protests on Sunday, which, I think, conveys clearly our message to the terrorists: “they wanted to get on our knees, and we were getting up stronger than ever”.

France still enjoys a very good reputation abroad. Unfortunately, we also saw an unprecedented social, economic and political crisis. And that’s all the French system which is threatened by these events, not just the freedom of expression.

What in current societal situation in France could have provoked the events in your opinion?

What inspired to replace a pen with Kalashnikov? Actually, it is not only a story of caricatures. Firstly, the story of terrorist creators: NATO fires for over 25 years in the Middle East, which has caused hatred towards the Western countries and the creation of thousands of terrorists (the day after the killing, NATO launched 5,000 bombs in Iraq).

On the other hand, in France, many social and economic crises have left a bad taste in the mouths of young French people of all origins (1/3 of graduates will not find work after graduation). When a young person has no future, he will follow anyone who offers him possibilities, even if it brings him to carry out such acts. Using social crises, the French Extreme Right reassures the French by finding the words they want to hear. This created a sense of frustration and an increase of Islamophobia in France.

And here comes the ripple effect: almost 1% of the Muslims don’t think our society offers a good future, and it’s them who are used by the radical people. Willing to feel important, privileged, will lead people to perform terrorist acts. As I said, this is not only a story of caricatures, but of a system that leads to the creation of terrorists.

How did your family and friends at home react to the events?

French democracy was attacked, this touched everyone. There is one thing that shocked me in the first hours after the announcement of the attacks, when we did not yet have all the necessary information: the number of labelling that has been done. People easily associated Muslims and radical and extremist terrorists. Then, gradually, this disappeared, replaced by national unity – Muslims, atheists, Jews, Christians, white or black – several religions, several colors form one France. And believe me, it hasn’t happened for a long time in France. Patriotism was somewhat hidden in recent years, because of the social and economic situation.

Unfortunately, we needed these barbaric acts to gather our country. Many of my friends have supported freedom of expression and the families of the victims speak against labelling, against Islamophobia and anti-Semitism. The same message was conveyed at the large gatherings in France and across the world. 4 million people were in the streets throughout France, it’s a symbol of unity.

Martin Luther King said: ‘we must learn to live together as brothers or perish together as fools.’ After these events we are at a global turning point. The fight against terrorism will increase, and the world will stand together. This global unity should not change, and we must also keep in mind that once people have fought for our freedom. Descartes said ‘Cogito Ergo Sum’ (‘I think therefore I am’), and that is what the members of Charlie Hebdo did. Do not be fooled by labels, do not fall into fear. Do not forget to think, do not forget to be free.

Higher education schools join together into the fight for freedom of speech and thought. ‘This horrible terrorist attack makes it even more urgent and necessary to allow our students to travel abroad. International mobility and intercultural exchanges are one of the many tools we have to fight extremism’, says an email from KTU partner Haute école des arts du Rhin. Its students are reacting to the events on the following blog: http://jesuischarlieaussi.tumblr.com/