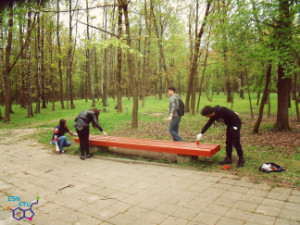 The spring is blooming and it is not a surprise that more and more people are thinking about doing something nice this time of a year. International students of Kaunas University of Technology are not an exception as well.

Even though most of the people think that “Erasmus” program is only for having fun and going to the parties non stop, ESN KTU (Erasmus Student Network) tries to bust this myth. That is why during the year they organize not only trips or parties but also social events. And they are very happy that this semester is full of good willing people who want to join these activities.

2015 started with euros and a lot of people didn’t throw out their last litas but donated them during “White coins action”. Initiative took place in all KTU dormitories where students together donated about 750 litas (217 euros). Later animal food and cleaning tools were bought from this money and these goods were given to animal shelter.

May started with “Blood Donation Week”. Initiative took place in Vilnius, Šiauliai, Klaipėda and, of course, Kaunas. Some students were worried and had to overcome their fear of blood but with the help from Kaunas’ Clinics Blood Center and ESN volunteers all those who wanted gave their drop of blood to support the good cause.

The biggest social event during spring semester was “SocialErasmus Week”. This year it took place during 4-10th of May. On Monday, 5 higher education institutions joined forces to make one of Ąžuolynas (Oak wood) squares more beautiful. Students tidied up the surroundings, painted a few benches, planted the flowers in a hope that this will become a beautiful tradition and every spring international students could give something back to Kaunas – a city which was were home for a couple of months or even years.

SocialErasmus Week continued on with a visit to animal shelter “Lesė” and with a mutual benefits from that: students who didn’t see their pets in months had an opportunity to play with the animals who don’t have the owners. Next day, ESN members, “Erasmus” students and full degree KTU international students went to the children care home “Atžalynas” to prove that language is not an issue to spend time together playing various games. The week ended with “Free Hugs” initiative. Even though students noticed that Lithuanians are a little bit suspicious and at first don’t trust these “strange” people who want to hug them but the afternoon was well spent – warm hugs and smiles filled Laisvės square and the old town.

Apart from these activities, during the semester ESN KTU organized other social events as well. International students visited Lithuanian schools to promote mobility and to let pupils to find out more about various cultures, wrote postcards and sent them to schools, taught their languages to KTU students, visited retirement home, willingly donated their old goods to incoming students and those who are in need.

If you want to do something good, don’t make excuses saying that you are the only one who wants to do something different or that you cannot be fully involved in Lithuanian social activities. As SocialErasmus Week’s slogan says, “Take action, make change, leave your mark” and little by little everything will start to look more beautiful.