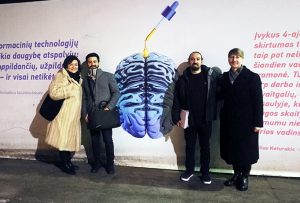 Two double degree doctoral theses in Environmental Engineering were defended at Kaunas University of Technology (KTU) earlier this month. Ali Enes Dingi and Semih Oguzdjan, doctoral students of KTU Institute of Environmental Engineering successfully defended their theses in the field of technological sciences. Both dissertations were prepared at KTU and Bologna University (Italy) in the four-year period from 2015 till 2019. This was the first time when a double degree doctoral theses between the two universities was defended.

In 2015, KTU and the University of Bologna, the oldest university in Europe, signed an agreement, under which a double degree might be acquired. Since then, both universities were working together in preparing researchers at the highest level of interdisciplinary competence in environmental engineering.

It is important to mention that during the public defence, the dissertations were evaluated by the competent international council consisting of the representatives from Kaunas University of Technology, University of Bologna, University of Basilicata, Vytautas Magnus University and Lithuanian Energy Institute. Double degree doctoral education is a great honour and responsibility that has provided many meaningful lessons for improving the process of doctoral studies. The double degree defences have formed a positive practice in the field of international university cooperation, which will be continued in the future.