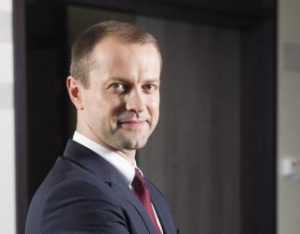 The Chairman of the ISM Board, dr. Ramon O‘Callaghan, pointed out that dr. Dalius Misiūnas will play a crucial role at ISM, providing strategic vision and leadership into the future. Dr. O‘Callaghan said: “As we embark on the future development of ISM, I am confident that dr. Misiūnas will be an inspiring leader, ensuring alignment of stakeholder priorities alongside with business development while improving scholarly excellence, student experience, and international reputation.”

“On behalf of the whole community, I congratulate the newly elected ISM Rector. I have no doubt that the ISM Board has accomplished their task precisely and elected the candidate whose competencies and experience will best meet its goals.

For my part, I’m full of hope, that we will continue the synergy-based collaboration developing joint projects, opening up new opportunities for studies, research and achieving the most important goals of leadership, quality and internationality for each university,” underlines KTU Rector Prof. Eugenijus Valatka.

Dr. Dalius Misiūnas, himself, indicated: “I am grateful to the ISM Board and the university community for their confidence and the opportunity to be part of the team for the next four years. Together we will strive to make ISM an example of flexibility, speed, innovation and openness in the region – a unique university whose voice is heard in the academic and business community.”

D. Misiūnas has graduated with a Bachelor’s degree from Kaunas University of Technology (KTU) and later studied at Lund University in Sweden, where he obtained his PhD. He has more than 10 years of experience in different business organizations – he worked for SWECO, Ernst & Young, Lietuvos Energija, and has been managing the largest Lithuanian capital company Maxima Group in recent years. D. Misiūnas has also been involved in educational activities as a member of the Council of Higher Education of Lithuania, Chairman of the Council of KTU and member of the Board of ISM.

The election of the new ISM President was announced in August 2018, as the term of the former Rector and one of the founders of the university assoc. prof. dr. Alfredas Chmieliauskas came to an end. From October 2018 Vice President for Studies prof. dr. Viltė Auruškevičienė has been serving as Interim President of the ISM university.

Kaunas: a crossroad of ideas

2 months ago
We are using cookies to provide statistics that help us give you the best experience of our site. You can find out more or switch them off if you prefer. However, by continuing to use the site without changing settings, you are agreeing to our use of cookies.
Sutinku