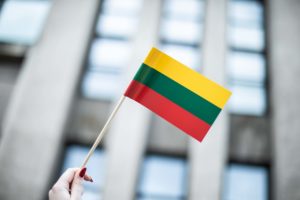 Independence Day across the world: greetings from KTU international students
Important
Separated by distance, united in celebrations: story of Lithuania and India
Important
February 16 is not only birthday of Lithuanian State, but also of national higher education
Important

March 11 is the Day of Re-Establishment of the State of Lithuania – on that day in 1990, our State claimed to the world that it is restoring the continuity of the interwar-Lithuania, which was interrupted by the Soviet occupation. Kaunas University of Technology (KTU) invites you to join the celebrations, giving meaning to this important occasion for Lithuania in a meaningful, cheerful and slightly less ordinary way.

As every year, KTU students are full of unconventional ideas of how to celebrate March 11. FUMSA, the Students Union of the KTU Faculty of Mathematics and Natural Sciences invites the University community and all interested to participate in the virtual event “Freedom BBQ 2021“.

In the programme of the event, the students promise discussions with interesting people and influencers. The event will be in Lithuanian, so grab a friend who speaks the local language or dedicate a day to practising it.

More initiatives all over Kaunas

March 11 will be celebrated in various spaces of Kaunas. Kaunas City Municipality announces that from the evening of March 9, Laisvės Avenue will be flooded with tricolour lights. During the dark hours of the day, the installation will adorn the city until Friday morning. Bright pillars of floodlights will also rise in the garden of the Vytautas the Great War Museum, symbolically highlighting the Freedom statue by Juozas Zikaras, one of the most prominent symbols for all Lithuanians, which survived through the Soviet occupation years.

The Kaunas Big Band (chief conductor Jievaras Jasinskis), KTU Choir Jaunystė (conductor Danguolė Beinarytė) and the soloist of the ensemble Ainiai Sandra Lebrikaitė are preparing a musical programme for citizens at home. The bands will perform “Palaimink, Dieve mus” (aka God Bless Us), one of the important anthems of the Singing Revolution.

Kaunas Chamber Theater will also invite those who miss the performing arts to a virtual performance “Alksniškės”, directed by Gytis Padegimas. The performance contains stories about Kazys Grinius, a President of Lithuania during the first independence, as he reflects on freedom, the events of the time and the future.

More detailed information about the Kaunas city programme for March 11 you will find on their Facebook page.