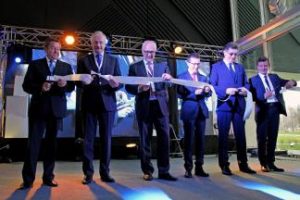 14 November an official opening of KTU Science and Technology Centre and Technological Business Incubator, part of Santaka Valley took place. KTU Santaka Valley is one of the largest and most modern open-access research and business centres in the Baltics. More than 150 million Litas (almost 44 million Euros) were invested in the project.

The first event in the freshly opened KTU Santaka Valley was the international conference ‘Lithuanian Research and Industry 2014: Valleys as a Medium to Innovation Economy’ which attracted huge attention from research and business community, and was attended by prominent Lithuanian society figures and representatives from government. Among more than 700 registered participants were more than half a hundred guests from abroad.

The participants of the conference ‘Lithuanian Research and Industry 2014: Valleys as a Medium to Innovation Economy’ were impressed by state-of-the-art laboratories of KTU Santaka Valley, by the efforts to concentrate research and business potential. They called it a catalyst for innovative business, and a symbol of a predicted breakthrough in Lithuanian economy.

‘I would like to express my gratitude to everyone who supported the idea. We started developing it 10 years ago, collaborating with left and right government. Santaka Valley in Kaunas is an ambitious and brave project, just the right one for Lithuanian today’, said KTU Rector Petras Baršauskas.

The Rector said an official thank you to all participants of the “Valley marathon” – researcher, businessmen and government representatives. These were the people who carried out the implementation of the idea, made the project live.

‘We have a result today: the real possibility, real space to expand and develop our intellectual capital which is of crucial importance in knowledge-intensive innovation economy’, said Baršauskas.

The Prime Minister of Lithuania Algirdas Butkevičius stressed the importance of KTU Santaka Valley both as Kaunas city landmark for its impressive modern architecture, and the symbol of synergy between business and research. Butkevičius is convinced that investing in science and research and fostering collaboration between science, business and government is the only way for building our country’s economical competitiveness.

‘Santaka Valley will serve as a hub for future technology and companies that will turn research ideas into business projects. We witness an important event, as the opening of the Centre with its modern laboratories will also improve the quality of academic studies’, said Butkevičius.

European Commissioner for Research, Science and Innovations Carlos Moedas was impressed by KTU Santaka Valley. Moedas assured the public that he will remember this visit always – it was the first official newly appointed Commissioner’s trip abroad. The European official said that he will mention KTU Santaka Valley as an excellent example of the efficient synergy of collaboration between European and national institutions and private sector.

‘One Portuguese poet has once said, that all the ideas to change the world are already born and written down. What we lack is their implementation. What we see here is the implementation, the result: from the idea, to the project, to the building, to knowledge’, said Moedas.

European Commissioner encouraged young researchers not to be scared of failing, and of asking questions. The most important thing, said Moedas, is to build your own confidence and confidence of those working closely with you. That is how wish to change the world will become innovations.

Lithuanian Minister of Education and Science Pavalkis said that the most important aspect of creating research and business centres is concentration of Lithuanian research potential.

‘By creating research and business valleys we concentrate Lithuanian scientific potential. The state-of-the-art laboratories in the newly opened KTU Santaka Valley matches the equipment in the best European research centres. The Santaka Valley will be a new catalyst for research and business collaboration in Lithuania, also giving an impulse to our students to apply their scientific ideas in innovation’, said Pavalkis.

Silicon Valley in the Baltics

The honourable guests and participants of the ceremony agree – KTU Santaka Valley is an analogue of Silicon Valley in the Baltics.

At KTU Santaka Valley researchers carry out frontier research and R&D activities in the areas of sustainable chemistry and biopharmacy, future energy, mechatronics and telecommunication technologies which are of crucial importance for developing knowledge economy in Lithuania. It hosts a Technological Business Incubator for knowledge-based enterprises.

The project was funded by EU Structural Funds, KTU as a founding partner invested 0.5 million of LTL (150 thousand EUR). First income from the open-access centre activities of is already flowing, full revenue of investment is predicted in 15 years.