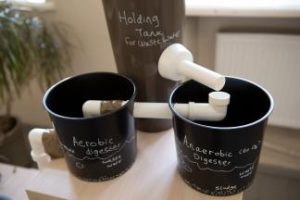 Between Art and Science: A Special Event of Numanities Congress

During the 2nd International Congress of Numanities, ICoN, there was also a parallel presentation of an interdisciplinary project “Between Art and Science: Green Technology and the Concept of “Phytomining”. The project is implemented by International Semiotics Institute, funded by Lithuanian Council for Culture.

“We all know Darwinian model of survival: social amebae (slime molds) can fight a fungal species (molds), which might cause the degradation of social amebae, and malignant cells (cancer) might be fought by benign cells until they fail to recognize and destroy them. On the other hand, there is a circular model within the nature. For example, microscopic plankton is eaten by marine mammals (like whales), which, when die, become food for the plankton itself, or partially decayed organic matter becomes an accumulation of turf, which in turn, becomes nutrition for growing plants”, the project leader, Mindaugas Gapševičius, presents the project idea.

The project analyses circular model both as a reproduction process in biology and as work being done during the congress.

“If reproduction is considered by scientists being a natural process of living organisms, the work during the congress is supposed to end up in feedback loops of shared information: we introduce our concept, listen for the conference presentations, evaluate them, produce some visual output and feedback it again into the conference in order to get further input”, says Gapševičius.

ABOUT ARTISTS and SCIENTISTS

Juan Pablo Díaz, cultural worker, born in Colombia where he studied fine arts and design. He has been living in Berlin for 10 years, where he also studied at the University of Berlin, Institute for Art in Context. Juan Pablo develops different interdisciplinary projects among artists, scientists, historians, anthropologists and others. From 2012 and 2014 he was co-running project space OKK/Raum 29 where he developed and organized projects and exhibitions on art, society and politics. His interests are decentralised structures and systems, collective work, hierarchies of power and questions about property of knowledge. At the 2nd International Congress of Numanities Juan Pablo introduces an idea of ecological sanitation he builds in his homestead in the suburbs of Berlin.

Brian Degger is a UK/Newcastle-based art and science practitioner, originally from Adelaide Australia, with a PhD in molecular biology. As a scientist that no longer inhabits the ‘white cube’ academic lab, he has a pressing need to learn more about science, and “rolling his own” equipment to find shortcuts and kludges, in order to operate on a shoestring. His interest in science has become more about ‘science’ as a culture than ‘science as experimentation’. So his passion is meta-science. At the 2nd International Congress of Numanities Brian Degger introduces algae treatment of waste. Using light to grow algae, he looks at constructing an algae scrubber, which is a water filtering device; in this process, undesirable chemicals are removed from the water.

Her work focuses on subjects of cultural identity and perception of the material and immaterial environment. Lina Rukeviciute is also a MigAA assistant based in Vilnius, Lithuania, and a coordinator at Lithuanian Interdisciplinary Artists Association. Earlier she has worked as an editor of Lithuanian art blog Artpit.org. At the 2nd International Congress of Numanities Lina Rukevičiūtė works on the concept of philosophical stone, a legendary alchemical substance said to be capable of turning base metals such as lead into gold, which is also sometimes believed to be an elixir of life, useful for possibly for achieving immortality.

John Tredinnick-Rowe is a 3rd year PhD student at the University of Exeter Medical School’s European Centre for Environment and Human Health. His publications include a wide range of interests from political nationalism Centre Maurits Coppieters (2012, 2014), Willett, J. and Tredinnick-Rowe, (2014), as well as the application of medical semiotics to economics (American Semiotic Society, 2014 ). In addition to studying for his Ph.D., he lives and works on his family farm in the west of Cornwall, UK, a region as far west and south as you can go in the British Isles. At the 2nd International Congress of Numanities explains the bio-chemical process by which plants are used to clean up excrements, or other dirty environments.

Mindaugas Gapševičius, researcher at the International Semiotics Institute and artistic assistant at the Bauhaus University, Weimar, was an active participant of the international new media art networks, which stimulated the formation of networks between Western countries and Baltic States in the last decade of the 20 century. The work of Mindaugas Gapševičius is to be associated with net art, software and interactive user interface. The artist conceptualizes the flow of digital information, analyzes its inner logic and modes of application. At the 2nd International Congress of Numanities Mindaugas Gapševičius introduces artistic concepts involving systems built out of carbon-based organic components and silicon-based electronic components.

His research interest is on agricultural lands (Agrarlandschafts-forschung). For the 2nd International Congress of Numanities Matthias Roth prepared a series of photographies on research he did in relation to phytomining concepts.