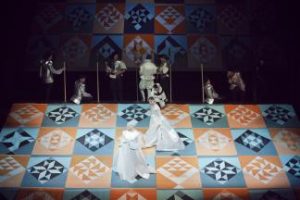 Barbara: Story of the Most Intriguing Woman in Lithuanian History on Kaunas National Theatre Stage

On Saturday 21 October Kaunas National Drama Theatre is inviting international Kaunas citizens and city guests to the theatre play “Barbara”, which is telling the story of the legendary couple – The Grand Duke of Lithuania Sigismund II Augustus and his beloved wife Barbara Radziwill – in the modern-day context.

The story of Barbara Radziwill (1520-1551) the Grand Duchess of Lithuania and the Queen of Poland is reborn on the stage of the National Kaunas Drama Theatre for the second time (1972, 2014). It is symbolic that after more than a 40-year break the director Jonas Jurašas is staging the same drama which had the biggest impact on his biography as it is related to his parting with Kaunas Drama Theatre and with Lithuania.

The director returns with a new vision of the play, which concentrates on the game of life and death.

“I do not want to repeat the legendary play, but to provide a fresh look at the play written by Juozas Grušas, emphasising the themes of destiny, suffering, redemption, love and death. The main character of the play is the Actress. She is eager to get back to the stage, to fight her destiny, to overcome her disease and even death. She wants to experience catharsis by becoming Barbora Radvilaite”, says Jurašas.

The translation of the play is being provided by Kaunas University of Technology (KTU) Technical Translation students and their teachers.

For the KTU-initiated innovation – live translations of theatre play – Kaunas National Drama Theatre was nominated for the United Nations World Tourism Organisation award for Excellence and Innovation in tourism in 2016.