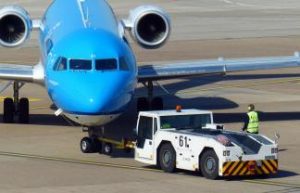 Aviation Industry Breakthrough in Kaunas: Aero Engineering Cluster of Education and Business Is Being Created

Solid foundation for Lithuanian aviation industry breakthrough has been laid in Kaunas’ region – the first in Europe cluster of aeronautical engineering companies and educational institutions is being created. After the airport is connected to the free economic zone and with a constant staff supply of qualified aviation engineers prepared at local university, Kaunas will be capable of accepting for service the great transatlantic aircrafts with repair value from several hundred thousand to several million euros.

According to the representative of the Lithuanian investment promotion agency Invest Lithuania Karolis Matulaitis, the cluster where educational institutions, governmental bodies and businesses join forces together to expand training of educated professionals, is a bold step forward developing aviation industry in Lithuania.

KTU’s Rector Petras Baršauskas said that one of the main objectives of the University is studies answering to the demands of modern society and economics. The KTU’s cooperation agreement with the major aeronautical engineering companies, which will accept students for internship and practice and will allow them improve their skills is one more step into the direction of this goal.

800 Jobs Waiting to Be Filled In

Aviation is among the most rapidly growing industries globally. According to International Air Transport Association (IATA) aviation companies worldwide will reach 709 billion US dollars’ revenue this year. This amount has doubled during the last two decades.

At the moment there are about 3 thousand people working in aviation industry in Lithuania, about half of them are highly skilled professionals carrying out aircraft maintenance and service. Lithuanian investment promotion agency Invest Lithuania predicts that within the next 5 years the demand for the staff in aircraft maintenance and service industry will increase by approximately 600-800 people.

Lithuania holds about 80 percent of Baltic aircraft maintenance, repair and overhaul services market. Kaunas occupies half of this market and has the potential to become the major player. There are only a few small aviation engineering companies in Latvia, and in Estonia there is one company with around 300 employees, which, same as Lithuanians, provides maintenance and repair services for Boeing 737 and Airbus 320.

The Airport Expansion with FEZ

“Kaunas today is the Lithuanian aviation engineering centre with huge potential. Not only it is in the excellent geographical location, but it also has a completely different airport structure from Vilnius. Although there are a few dozens of airlines flying to Vilnius, which may seem as a potential to grow commercial aircraft repair business, the airport is too close to the residential city area, therefore its expansion will be limited in the future”, says Matulaitis, an aviation investment consultant at Invest Lithuania.

According to him, Kaunas airport which has the longest airport runway in the Baltics, is open for infrastructure expansion especially towards South, in the direction of Kaunas’ free economic zone (FEZ). The alliance between airport and FEZ would allow to create aircraft maintenance businesses with lowest fares in the region. Also Kaunas airport is ideal for wide-body aircraft machines.

According to Matulaitis, the main problem faced by the aircraft maintenance and repair companies is education and training of skilled professionals.

“The industry needs licenced workers who have completed special training. The step KTU is taking today is a very bold move forward creating an organisation in Lithuania, which ensures the training of specialists in accordance with a program approved by the European Aviation Safety Agency (EASA)”, says Matulaitis.

According to him, usually such programmes are very expensive both for the university and for students. With state and business support KTU students would have the unique opportunity in Europe to obtain high class education almost for free. He maintains that the expected monthly salary of the young professionals after studies is around 1.5 K euros.

Two Semesters of Work Placement and a Guaranteed Job

During the meeting between the representatives of Lithuanian Civil Aviation Administration and Invest Lithuania, which resulted in the signing of the agreement, the detailed Avia Practica work placement model which will be applied in the Aviation Engineering study programme from next September was introduced. According to the model, the students will have two semesters during the four years of studies for deepening their specialisation skills, or for going abroad on study exchange or for choosing work placement in an aviation company.

“In such a way students will gain real knowledge and skills during their study process, as they will solve real industry problems. Avia Practica model ensures that after the four years at the university the student has a year’s practical experience, which is invaluable for the graduates of Aviation Engineering”, says KTU’s Vice-Rector for Studies Jurgita Šiugždinienė.

The work placement practice is being encouraged and supported by aviation businesses. They count that they could to employ about 250 professionals today, who could help to expand business or to replace the foreign professionals employed by the companies.

“The competencies of Lithuanian aviation companies and the number of jobs are growing every year. We need new professionals and are always willing to employ skilled soon-to-be graduates and young professionals”, says Laimonas Latvėnas, Technical Maintenance Manager at DOT LT.