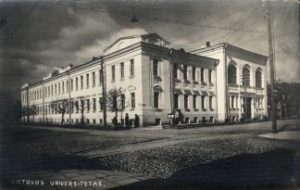 The festivities will start on Wednesday, 15 February at KTU Central Building (Donelaičio Street 73) at 3pm. Everybody is invited to a show by KTU Theatre Studio 44 and to a concert by Nemunas folk music ensemble.

“Our aim was to trace the history through the life of personalities who influenced greatly the formation both of the University and the State. For this exhibition we chose prominent people who worked for the restoration of the Lithuanian State and for the building and developing of the University: the Signees of the Act of February 16, President Antanas Smetona, 4 Prime Ministers – Augustinas Voldemaras, Pranas Dovydaitis, Antanas Tumėnas, Leonas Bistras – the ministers Petras Leonas and Vladas Jurgutis, and the Signees of Act of March 11 (the Act of Re-establishment of Lithuanian Independence)”, says the director of the KTU Museum Audronė Veilentienė.

The special part of the exhibition will be dedicated to the fighters for the Freedom of Lithuania.

“The restoration of the State is a miracle – we have managed to raise up from the ashes after war. Our people not only managed to recreate the Lithuanian state, but also to build the urban heritage, which is only now being rediscovered by Europe”, says Veilentienė.

The predecessor of KTU, the University of Lithuania (former Higher Courses) was founded in 1922 to fulfil the need of state officials who would have appropriate education and would also speak Lithuanian. More than 600 of future students registered to the Courses in the very first week.

Visiting of the exhibition is free of charge, it will be open on workdays 8am–5pm.